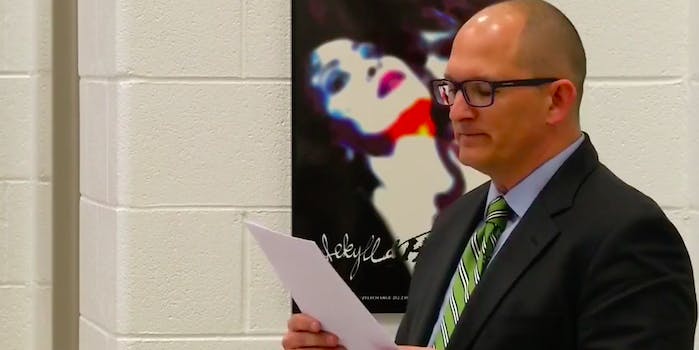 Peter Vlaming was suspended from West Point High School for refusing to address a trans boy as "he."

A high school teacher in West Point, Virginia, has been fired for refusing to call a transgender student by his preferred pronouns, citing his religious beliefs.

Suzanne Aunspach, the assistant principal at West Point High School, said she was notified of the student’s move to transition from female to male in August, and that she then met with individual teachers to explain and discuss the transition.

Principal Jonathan Hochman said Vlaming refused to use male pronouns, in violation of school policy. “I like the student and miss the female version of the student,” Vlaming reportedly told Hochman.

Vlaming, who taught French, refused to back down at a public school board hearing on Thursday, saying, “We are here today because a specific worldview is being imposed on me. Even higher than my family ranks my faith.”

After reading from a prepared statement, BuzzFeed reports, Vlaming was asked by a school board member whether, if permitted to continue teaching at West Point High School, he would follow school policy and call the student by his preferred pronouns.

“And so you will refuse to use male pronouns to refer to the student in question, is that correct?” the school board member asked.

Vlaming said he is pursuing his legal options, calling his firing “absurd” and arguing that he was fired for something he did not say. However, BuzzFeed cited an Oct. 31 incident in which Vlaming called the student by the wrong pronouns. Upon seeing the student about to run into a wall, BuzzFeed reports, Vlaming told other students, “Don’t let her run into the wall.” Vlaming said the incident was a “slip-up,” and that he was acting out of instinct. He reported the incident to the principal and was placed on administrative leave the next day.

A Facebook live stream of the hearing shows several commenters supporting Vlaming, calling for him to be reinstated. About 100 middle and high school students staged a walkout Friday in support of Vlaming.