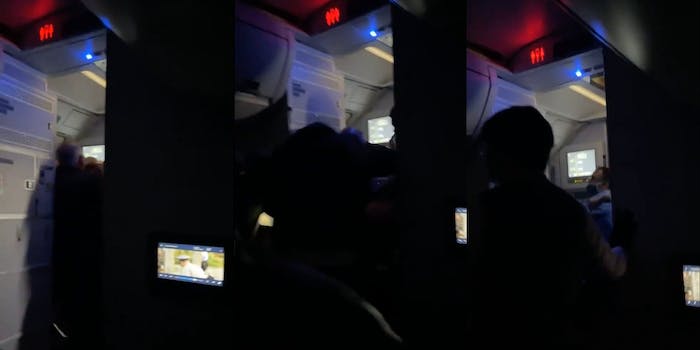 Unintelligible shouting can be heard, and someone within the struggle yells, 'Get out of the cockpit.'

The Twitter account @rawsalerts tweeted a video of what appears to be a skirmish near the cockpit between the male passenger and crew members trying to restrain him.

Unintelligible shouting can be heard, and someone within the altercation yells, “Get out of the cockpit.”

The passenger appears to be forcibly removed from the cockpit.

The Delta flight, bound from Los Angeles, California to Atlanta, Georgia made an emergency stop at Will Rogers World Airport in Oklahoma City, Oklahoma.

TikTok user Benjamin Curlee, or @benjamincurlee, said in a video that he was aboard the plane. He said someone who claimed to be an off-duty flight attendant made an announcement over the loudspeaker, saying “everyone please take your seat and get ready to put on an oxygen mask.”

Then the man attempted to open the door of the plane.

Curlee said the pilot made an announcement shortly after asking all able-bodied men to come to the front of the plane because of an emergency. He got about halfway up from the back before the pilot announced that the situation was under control.

According to Curlee, the man was handed over to law enforcement after the emergency landing.

The Oklahoma City police tweeted Saturday afternoon that the case and the release of all information regarding it is being handled by the FBI.

The FBI has not yet released any information regarding the incident. Curlee did not immediately respond to the Daily Dot’s request for comment.