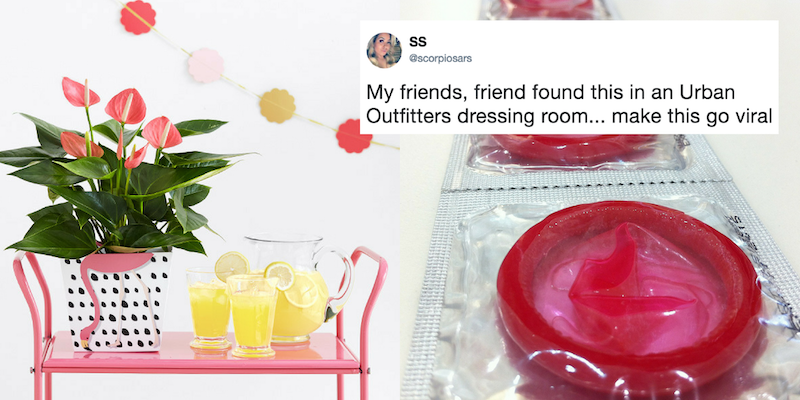 Breaking news: Being a teen is still terrifying.

Being a teen is a torturous sentence I would never wish upon my worst enemy, and this viral “summer bucket list 2017 <3” is cold, hard proof that Generation Z isn’t immune to the hardships of teen-dom.

On Friday, a Twitter user by the name of Sarah shared a photo of this wondrous yet terrifying list that a friend of hers had found in, wait for it… an Urban Outfitters dressing room in Pittsburgh. Because of course, the Gen Z-targeted clothing and home goods chain is prime real estate for teens lookin’ to get their bucket list on.

My friends, friend found this in an Urban Outfitters dressing room… make this go viral pic.twitter.com/27u9s2jyfA

The list is, to put it bluntly, frightening, spanning more than 40 hashtag-summer-goals that exude the air of someone who still enjoys the finer blessings in life but who has a warped idea of what it’s like to be an adult. This person, who I am assuming is a girl, already had their first kiss and has sampled both weed and alcohol (as exemplified by their lack of mention on the list) but hasn’t had sex yet and also still needs to complete her summer reading (something I recall being assigned as early as ninth grade).

Just look at what this teen is hoping to get done this summer—or has already accomplished, as denoted by the “[check]”:

“Make this go viral,” Sarah wrote in her tweet sharing the bucket list, and viral it went. Just the sheer absurdity in the contrast between some of these goals (eat cotton candy vs. give 2 blow jobs), as well as our list-writer’s priorities (she’s already gotten drunk all the time, but hasn’t fixed her home screen? C’mon, girl), primed this content perfect for virality.

honestly i've been looking at this for 4 hours

Too much for one summer!!!!

Naturally, the “tag yourself” meme format took hold, because sometimes you just realize that “8 hoe pics for Instagram” is exactly your brand.

But that’s the thing about actually growing up and looking back on all the things you thought were cool because you thought your friends thought they were cool and the older kids at your school really thought they were cool because their older siblings were doing it, so it definitely had to be cool, right? That’s exactly it. You get older and look back to realize just how terrifying it was to face that kind of pressure so young. It’s not a feeling of regret, but more of a hindsight that only graduating from the teen experience can afford you.

I will always thank whatever higher power prevented the internet from being what it is now when I was in growing up. I had picture comments and Top 8 “friend” arrangements on MySpace and some light Facebook functionality, but the average teen’s social networking was nowhere near as performative as what Instagram and Snapchat have built these audiences to be. There’s social currency within exuding this fun, “bucket list”-accomplishing personality online and garnering thousands of likes, comments, and followers for it. There’s a reason 8 ho pics for Instagram is a lofty bucket list goal. As evidenced by this viral list, being a teen is still fucking terrifying, but worse.

Good luck to this teen who still wants to visit the amusement parks and have a lemonade stand with her friend and has already managed to “hook up” with Jacob (again). Her summer goals are more than likely something 13-year-old me would have copied off Tumblr, down to the alternating pen color, but that doesn’t make the reality of this list any less jarring.

I am rooting for her. I hope she doesn’t have the most awful experience the first time she gets crossfaded, and that whoever gives her a boob hickey doesn’t run and go tell his shitty friends about it. Above all, I hope that she’s OK.