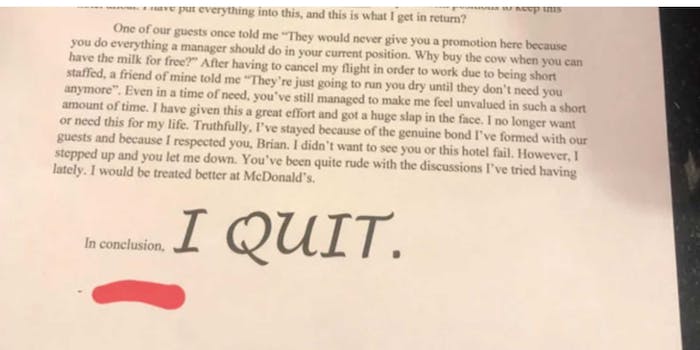 ‘I have given this huge effort and got a slap in the face’: Hotel worker’s viral quitting letter sparks debate about overperforming at a job

'One of the best pieces of advice I got early in my career: Never be too good at a bad job.'

One redditor was doubly out of luck when they got locked out of their hotel room yesterday. When they went to the front desk for help, they discovered that the woman working the desk was gone—leaving a triumphant parting letter in her place.

The quitting letter gained traction on the subreddit r/pics and landed on the popular page on Reddit. The letter starts with the front desk woman, identified as Milly, explaining how she has put up with the hotel’s understaffing and overworking issues, all with a smile on her face. All she wanted in return for her hard work was to be considered for a management position in the future. She wrote that “Brian,” seemingly her superior, had told her that there were no leadership openings, but he would let her know as soon as one became available because she was a “great candidate.”

However, when the time came, Brian did not inform Milly of the opening, rather he sent her an email saying the hotel had hired a completely new manager. When she pressed him for an explanation, he apparently refused to give her one and called her “ridiculous.” She expresses how hurt she was that she was not considered for the position. Milly then continues the letter by listing all of the tasks she had been doing for the hotel—most of which appeared out of the typical description for a front desk agent—proving that she had gone above and beyond for her job.

“I have worked my tail off working doubles, coming in on my days off to do social, cleaning rooms, folding laundry, preparing breakfast, all while watching the Front Desk as well… Just for you to offer no explanation as to why a new manager was hired and I wasn’t even considered?” she wrote.

She wraps up the letter by sharing that customers and friends had warned her that the hotel was never going to promote her and management would just exploit her if she stayed.

“One of our guests once told me ‘They would never give you a promotion here because you do everything a manager should do in your current position. Why buy the cow when you can have the milk for free?’” Milly wrote. “After having to cancel my flight in order to work due to being short staffed, a friend of mine told me ‘They’re just going to run you dry until they don’t need you anymore.’ Even in a time of need, you’ve still managed to make me feel unvalued in such a short amount of time. I have given this a great effort and got a huge slap in the face. I no longer want or need this for my life.”

She ends the letter with an all-caps, “I QUIT.”

Redditors applauded Milly’s decision and reflected on their own bad working stories.

“As a former hotel front desk employee, I salute Milly,” one user said. “ It is a hard thankless job, harder then all my jobs as a server.”

“Sad truth here, but if you become irreplaceable, you become unpromotable,” another remarked.

“One of the best pieces of advice I got early in my career: Never be too good at a bad job,” a redditor shared.

“If you can do more, you seldom are noticed with promotions or raises,” one person said of their customer service jobs. “[You’re] often working yourself into a position you’ll never raise out of because what the empire receives in exchange for the money cannot be matched. Essentially, you become too valuable to move because of the cost/value that you’re killing yourself to provide.”

It’s unconfirmed where the hotel is located, but several redditors have speculated that this incident occurred at the Staybridge Suites in West Des Moines, Iowa. The ire has made its way to the hotel’s Google Reviews page, where the most recent entries include numerous one-star reviews demanding justice for Milly. The Daily Dot has reached out to the Staybridge Suites about this matter and will update when we receive more information.