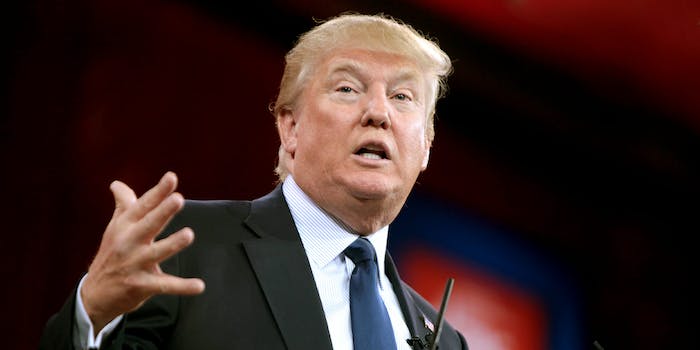 If we can’t have a national dialogue about mental health or gun rights, how about violence against women?

On Sunday morning, Devin Patrick Kelley opened fire into a Sutherland Springs, Texas, Baptist church, killing 26 people, including 14 children and a pregnant woman. President Donald Trump, who is in Japan on business, said at a press conference that the shooting isn’t about access to guns. Instead, he said, “I think that mental health is your problem here.”

“This was a very, based on preliminary reports, very deranged individual, a lot of problems, over a long period of time,” he said. “We have a lot of mental health problems in our country, as do other countries. But this isn’t a guns situation.”

However, investigators haven’t released any information about Kelley’s mental health history yet. And given that Trump wasn’t his personal psychiatrist, nor is he trained to give armchair diagnoses, he isn’t qualified to speak to those issues. But one thing we do know about the shooter, whom Trump called “deranged,” is that Kelley was a violent man. He was a man, like many mass shooters, who was violent toward women.

In 2012, Kelley, who served in the Air Force, was court-martialed and convicted on two counts of assaulting his then-wife and stepson, whose skull he had cracked, according to the New York Times. He was sentenced to 12 months in custody and subsequently discharged from service—which made it illegal for him to buy firearms under the federal Gun Control Act. He was also investigated but not charged on a rape complaint.

Authorities Monday afternoon also said the church shooting was possibly motivated by a “domestic situation,” as the mother of his estranged wife usually attended the church. “We know that he had made threatening texts,” said Freeman Martin, a spokesman for the Texas Department of Public Safety, according to the New York Times.

“This was not racially motivated. It wasn’t over religious beliefs. It was a domestic situation going on,” he added.

Domestic violence, harassment, and a contempt for women cannot be explained away by mental illness. When 57 percent of mass shooters have a history of being violent toward women, according to Everytown for Gun Safety, what is clear is that we live in a country that is accepting—expecting even, and then dismissive—of men’s anger and violent outbursts.

The Las Vegas shooter, the man responsible for the largest mass murder in modern U.S. history, was alleged to have been at least verbally abusive to his girlfriend in public. The wife of the Pulse shooter said she was physically abused by her husband. The Virginia Tech shooter, the Sandy Hook shooter, the Planned Parenthood shooter—all had histories of either abuse, hatred, or harassment toward women. Then there is the most blatant: The Santa Barbara, California shooter who admitted in a video: “All those girls I’ve desired so much… I’ll take great pleasure in slaughtering all of you.”

That isn’t to say there isn’t a mental health problem in this country. Indeed, there are two: There is a grand stigma associated with getting treatment for mental health—and that stigma is definitely stronger for men, who are supposed to just “tough it out” and are often conditioned to bottle their feelings until they express them through anger and violence. Furthermore, it’s ironic to hear our president bring up the nation’s mental health “problem,” when affordable mental healthcare is harder to access in this country than guns and when he hoped to slash mental health services even further with an Obamacare repeal.

And yeah, I would like to deal with our “gun situation,” too. Because what is clearer than Kelley’s mental health status is that if he didn’t have access to the gun that was illegal for him to own, 26 people would not be dead in Sutherland Springs.

But before we dismiss white male shooters as mentally ill and brown-skinned religious shooters as terrorists, and before we condense the national dialogue into one about gun rights that will soon be forgotten, we need to look at why many white men in our country think it’s OK to take out their anger and contempt on innocent people they believe they can have control over. We need to address why it is still hard for a country run by powerful white men to admit we have a violence-against-women problem.

Editor’s note: This piece has been updated to include the latest comments from Texas authorities.