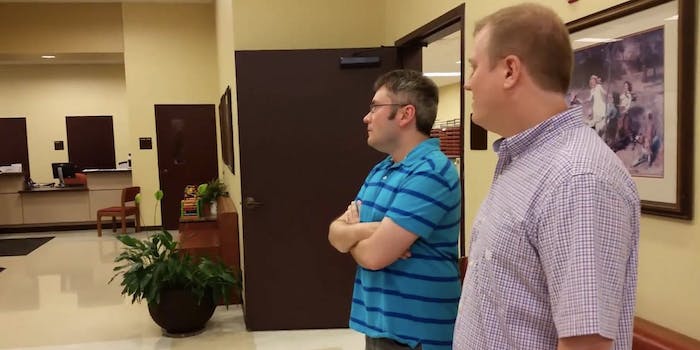 The worst part? This isn't an isolated incident.

When the U.S. Supreme Court issued its June 29 ruling stating that marriage is a constitutional right for all citizens, including same-sex couples, the country rejoiced. Pride festivities that weekend were especially emotional, national monuments across the nation (even in Arkansas) were lit up in rainbow colors, and seemingly everyone‘s formerly homophobic uncle caught Facebook‘s rainbow filter fever.

So how is that marriage equality thing working out a week later? Not so good, as it turns out.

As same-sex couples in various states flood their local courthouses to apply for marriage licenses, many are being refused service and turned away despite state lawmakers issuing legal clarifications demanding that government workers comply. Many of those couples are also bringing along cameras to ensure proof of the illegal denials—and those videos are going viral.

One video shows Rowan County, Kentucky, resident David V. Moore attempting to secure a license with his partner. The couple is ignored by somewhat hostile staff before finally being able to chat with the clerk, who demands that they shut off the camera. The ACLU is suing county clerk Kim Davis, shown at the end of the video, for her blanket refusal to issue marriage licenses to any same-sex couple.

Moore later posted to his Facebook profile, writing that the couple was ultimately denied a license and turned away empty-handed.

While Moore knew in advance that he and his partner were likely to be denied, a lesbian couple in Toledo, Ohio, was shocked to discover that the on-duty judge wouldn’t perform their marriage even after a clerk issued their license without a problem.

“While we were waiting, the bailiff came out and asked to speak to us in the hallway. We were told at that time that Judge McConnell didn’t do this type of wedding and we would have to go somewhere else,” Carolyn Wilson told Toledo News Now of her botched wedding day. “She said he doesn’t perform these type of marriages and that was left to interpretation. We didn’t follow up; we made assumptions that it was based on same-sex.”

Luckily, Wilson and her fiancé simply went to another judge in the same courthouse and were married that same day.

A Hood County, Texas couple was also able to eventually receive a marriage license there, but only after a major scuffle in which they were escorted out because county clerk Katie Lang said her religious beliefs prevented her from issuing a license to a same-sex pair.

Joe Stapleton and Jim Cato, the couple of 17 years shown in the video, were only able to get married after a lightning-speed lawsuit against Lang’s office resulted in a license this Monday.

In some states, clerks were so perturbed by the idea of issuing a marriage license to a gay couple that they actually resigned from their jobs to avoid complying with the law. In Mississippi, Grenada County clerk Linda Barnette resigned after 24 years on the job, telling MSNBC, “I would be the one issuing the license so it would be like I would be the one approving of this lifestyle, which I do not.”

Right next door to Mississippi, 17 of Alabama’s 67 counties were refusing to issue marriage licenses to anyone as of July 7. According to Ballotpedia, which has been tracking which U.S. counties are in compliance with the SCOTUS ruling, those 17 counties went from refusing to issue licenses just for same-sex couples to closing up shop on the marriage business altogether. Luckily for Alabama residents, a couple does not have to apply for a license in the county where they reside.

The state with the largest amount of refusals, though, is Texas—where 27 counties were cited by Ballotpedia as not issuing the marriage licenses to same-sex couples due to “technical difficulties” or paperwork issues. However, 88 percent of the counties in the state were issuing licenses without reported problems.