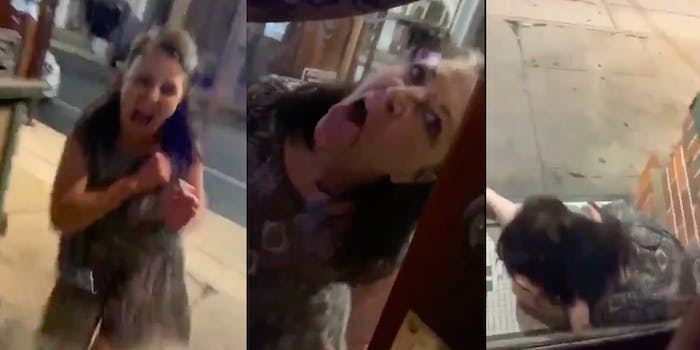 After a woman was denied entry at a bar in Houma, Louisiana, she drunkenly began running into and licking the glass door, earning her the moniker of “Zombie Karen.”

The woman is seen charging at the door full speed, slamming her body into it to get into the building. After she fails, she begins to lick the glass, and the man recording the video says, “This is f*cking I Am Legend!”

The 2007 post-apocalyptic action thriller stars Will Smith and is based on a plague infecting humans, turning them into zombie-like monsters. Someone even created an I Am Karen mini-video combining a clip of I Am Legend and the viral “Zombie Karen” video.

“You think this is funny?” the woman, presumably drunk, yells at the people in the bar. “I think this is very funny,” the man recording yells back. Again, she walks back, charges full-speed into the door, and licks it. The woman eventually ends up knocking herself out and was later arrested by the police.

Many commenters are expressing concern about the woman’s mental health. “She appears mentally ill and the people inside are laughing and recording her,” Twitter user @bluefox198107 wrote. Another user tweeted, “Guys come on this woman has mental health issues….. she needs help not mocking. She isn’t exactly a Karen….I found this uncomfortable watching…..”

One user alleged she used the N-word during her outburst. “I almost got concerned until she used the N word,” they tweeted, “As soon as she said that my sympathy and empathy went right out the window. Sorry I no longer cared if she was on something or needed help.”

Others continued to make jokes about this interaction. One user tweeted, “Pro tip: if you sprinkle seasoning in a circle around your building, white people will not be able to cross it.”

The woman has yet to be identified.