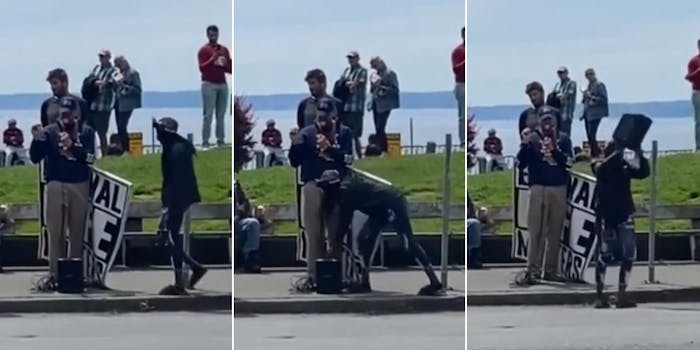 'At least put in a bit of effort.'

A viral video on Reddit shows a fed-up Black woman taking an amplifier from a loud street preacher with a sign reading “eternal life matter” in Seattle and smoothly walking away with it.

Posted by u/nilsp123, the video shows a man proselytizing in Victor Steinbrueck Park, near tourist destination Pike Place. The man has at least one person assisting him and is hauling the oversized “eternal life matters” sign. The slogan distorts and appropriates the racial injustice context of Black Lives Matter.

The man points and says, “He’s coming back to judge the worldly unrighteousness.”

The Black woman next to him is antsy, but after that judgy comment, she unplugs the man’s microphone from a small amplifier and walks off with it. She never looks back.

As she walks off, another man runs up onto the preacher, who’s now walking quickly. The man manages to hold the preacher off long enough for the woman to disappear out of view as she zooms past the Seatown restaurant and into a parking garage.

One Redditor wrote jokingly, “That’s why you just gotta learn to project your voice. I hate people using artificial amplification on a public street. I mean, if you want to stand on a soapbox and yell, that’s fine, but at least put in a bit of effort. I’d much rather hear the guy with a saxophone.”

The response was a zinger: “Jesus never used artificial amplification. It’s just not in the bible. Guess this sinner is going to hell.”