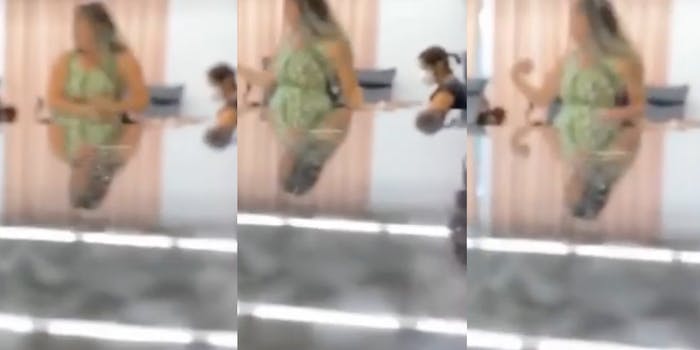 'You make money and you live in my country and you’re gonna tell me you can’t do my nails.'

A viral video shows a woman in Florida going on a racist rant directed at a nail technician. In the middle of the rant, the woman also quoted rapper Bhad Bhabie’s famous catchphrase, “Cash me outside, how ‘bout that?”

At the start of the video, the woman, who identifies herself as Corina Monica, can be heard yelling at the nail technician.

“I’m not leaving until you fix my nails,” Monica says. “I think everybody here would agree, right?”

The nail technician can be heard saying “no” and suggests that she should go to another salon. This prompts the woman to unleash a racist tirade on the nail salon employee.

“Where are you from?” Monica asks, to which the employee replies, “Why? Are you worried? Why are you so worried?”

“No I’m not worried! Why do you come to this country, work here, and don’t do what’s right for our citizens?” Monaca asks. “You make money and you live in my country and you’re gonna tell me you can’t do my nails, bitch? Who the fuck do you think you are?”

“Go back to your fucking country,” she yells to the nail technician.

The employee calmly tells her that she needs to leave and Monica replies, “Make me leave! Meet me outside, cash me outside, how ‘bout that?”

The salon erupts with laughter as she threatens to “fuck up” the nail technician.

She then tells the salon how she’s an independent recording artist who is about to “blow the fuck up” and how they’ll be begging her to get her nails done at the salon. The employee just laughs as Monica makes her exit.

TMZ confirmed that the nail technician who Monica was yelling at was born in the United States.