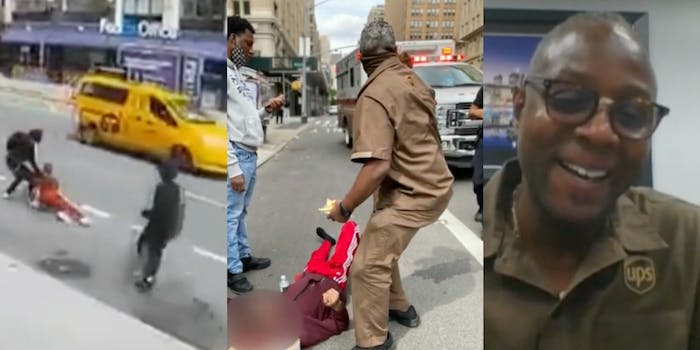 The UPS driver 'jumped in and handled it like it was his own kid.'

A UPS driver is being applauded after he was caught on video rescuing a teenager who was getting beat up and allegedly robbed in the streets of Manhattan on Friday.

The video was published by CBS Sacramento on Wednesday and shows two men in black clothing running after a teen in red clothing.

According to the nearby surveillance footage, one of the men grabs the teen, briefly drags him on the street, and begins punching him. The other man then kicks the teen.

The men are seen taking off the teen’s sneakers before leaving. At that moment, a UPS driver is seen walking out of a building and toward the teen.

The man has been identified as Christopher McCall; he told CBS that he yelled at the men.

“Really? That’s all you want? You wanted his sneakers?’” McCall recalled saying to them.

McCall said the 17-year-old then alerted him that he was diabetic, so McCall used one of his packages to lift up his head so that he could breathe easier.

Another bystander, identified by CBS as Lindsay Patwich, said McCall was “very heroic” and that he “jumped in and handled it like it was his own kid.”

“It was amazing to see New Yorkers come together rather than just walk,” Patwich, who called 911, told CBS.

Two teenagers—a 16-year-old and a 17-year-old—were reportedly arrested and charged in connection to the incident. They were reportedly charged with robbery and possession of stolen property.

The Daily Dot has reached out to the New York Police Department.