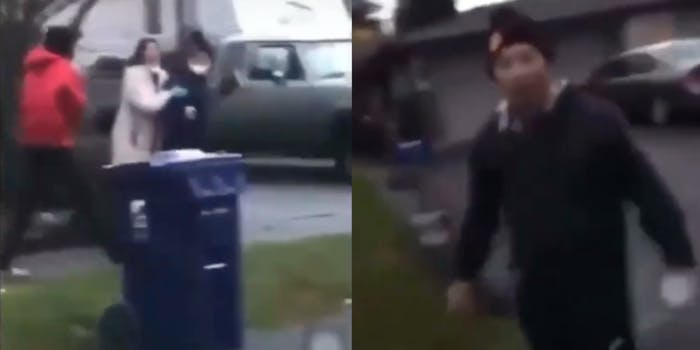 Although the attack happened in 2020, police were able to make an arrest after the video surfaced.

An Asian couple were assaulted by a teenager in Washington state in shocking video posted to social media.

The footage, captured in the city of Tacoma, shows a 15-year-old boy running up to the couple before throwing several punches at the 56-year-old man.

The individual filming can also be heard claiming that he attacked the man, who appears to be bleeding from the face, in a second video posted to Facebook.

The incident, according to King 5 News, actually took place in November of 2020. It wasn’t until this week that the videos began circulating online.

The man who was attacked suffered a broken rib as a result and reported the incident to the police at the time.

In a statement to King 5 News, police spokesperson Wendy Haddow stated that the department had originally been unable to locate the alleged perpetrators.

“At that time the only suspect information was two black males aged 13 to 17 years,” Haddow said. “There was no known video at that time.”

Haddow added that the victim’s family alerted police to the video after seeing it on social media this week.

The 15-year-old seen in the first video was quickly identified and taken into custody on Friday. Although Tacoma police stated earlier in the week that the incident was being investigated as a hate crime, the teen was only charged with second-degree assault thus far.

It remains unclear whether police have found or intend to charge the other teens in the video.

The incident is just yet another example of violence against Asians in recent months.