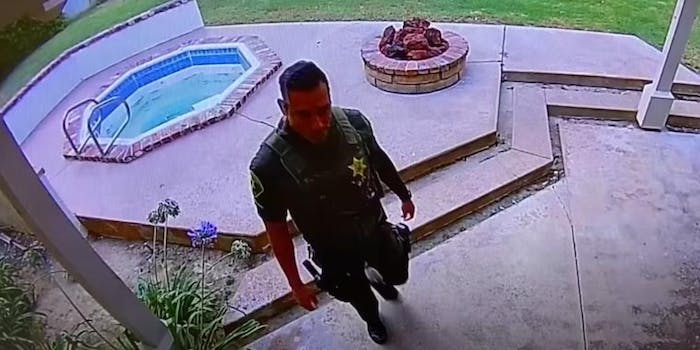 Steve Hortz is said to have returned and broken into the home a total of three times.

A sheriff’s deputy in California has been accused of burglary after surveillance footage showed him at the home of a deceased man.

In July, a 12-year veteran of the Orange County Sheriff’s Office, Deputy Steve Hortz was called to the residence of an elderly man who recently died of natural causes.

Hortz is said to have returned and broken into the home a total of three times over the next month to steal property from inside. The deputy was seen wearing his uniform during the first visit but is believed to have returned the second and third time in plainclothes.

The officer was seemingly unaware of the surveillance cameras that captured him leaving the home with numerous objects including “weapon safes, ceiling fans, and cases containing unknown items,” according to a statement from the sheriff’s office.

The footage was provided to the sheriff’s office earlier this week by the deceased homeowner’s lawyer.

Hortz was arrested, charged with burglary, and placed on administrative leave not long after.

In statements to the public, Sheriff Don Barnes called the deputy’s actions “inexcusable.”

“The suspected criminal actions of this deputy are a violation of public trust, are inexcusable and intolerable,” Barnes said. “I will hold accountable deputies who do not honor the oath they swore to uphold.”

As noted by Global News, Hortz is the second deputy with the Orange County Sheriff’s Office to face charges this week. Deputy Angelina Cortez was reportedly charged with filing a false police report on Wednesday after allegedly stealing a suspect’s credit card and giving it to her son.