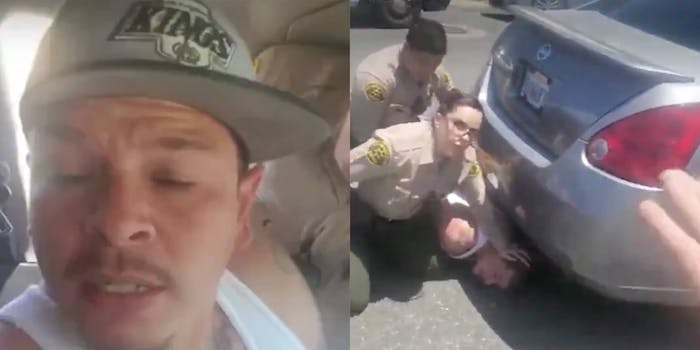 The officer is under investigation.

A deputy with the Los Angeles County Sheriff’s Department is being investigated after punching a man during a traffic stop, KABC-TV reports.

Jesus Medina was arrested for assault with a deadly weapon against a police officer, driving without a license, and resisting arrest. Sheriff Alex Villanueva alleges that Medina kicked a female officer, although that is not shown in the video.

Villanueva is not the officer who arrested Medina. The video shows an unnamed sheriff’s deputy trying to open the car door from the outside and inside before resorting to blows.

Medina and his brother Omar were pulled over for what they were told by the sheriff’s deputy was a window tint and sticker violation, according to KABC-TV. Omar began recording the seven-minute video and shared it to his Instagram account.

KTLA-TV reports that the video has prompted an investigation for use of force.

“Not only will this use of force be thoroughly investigated, but we will also examine the tactics, policies & procedures,” Villanueva said in a statement. “This incident desperately illustrates the need for the Board of Supervisors to fully fund LASD body-worn cameras.”

In a Facebook Live Town Hall, Capt. Kerry Carter said most incidents like this one begin with a lack of compliance with police orders. In the comments, users referenced justice for Medina and asked for further detail about actions being taken regarding the officer seen in Medina’s video.

Two other arrests were made. The first was that of a passenger for failure to comply with a lawful order, and the second of someone in the back seat of Medina’s car, who was arrested for possession of methamphetamine intended for sale.