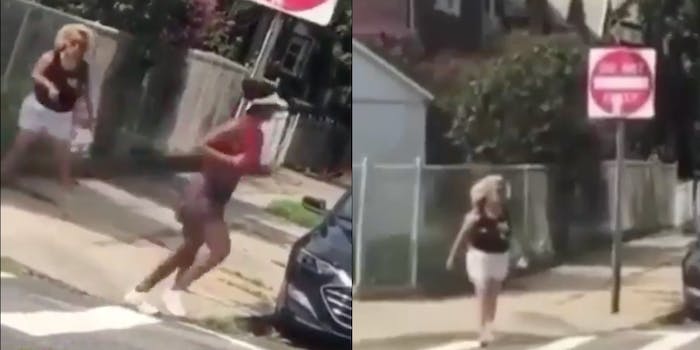 The NYPD asked that people help identify the suspect.

The New York Police Department is looking for a woman in Queens who threw a glass bottle and yelled a racial slur at a Black woman who was jogging in an Aug. 17 incident, NBC reports.

A 16-second video shows a 37-year-old woman jogging across the street as an older white woman throws a bottle at her. The older woman yells, “Get out, get the fuck out.”

The woman jogging says, “What’s your problem?” The older woman responds by yelling a racial slur.

The NYPD posted the video on Twitter on Wednesday asking if anyone could identify the older woman.

Commenters called the woman a “Karen” and wrote that her behavior is “disgusting.”

The officers described the suspect as a light-complected woman with blue eyes and blonde hair in her 40s who is about 5 feet, 5 inches tall and 160 pounds, the New York Post reports.