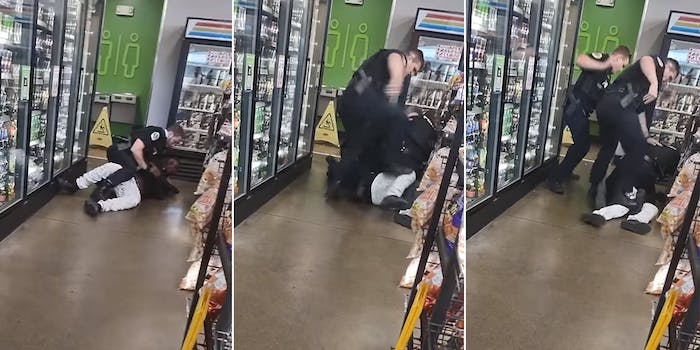 ‘There is no reason’: Video shows cop stomping on Black man with schizophrenia during gas station arrest

'There must be public accountability with clear examples like this.'

A viral Facebook video shows an Alabama police officer stomping on a leg of a Black man with a mental health condition who was already subdued.

The camera phone footage was filmed by Bruce Turner on Sunday inside a Mapco gas station in Huntsville, where an officer struggled to restrain 22-year-old Kemontae Hobbs before several other officers joined the fray.

The reason for the police call is unclear; however, a Mapco employee called emergency services.

In the background of the video, an unseen woman is yelling, “Help us.”

Another officer joins in and attempts to hold down Hobbs’ head and shoulders. However, a third cop repeatedly stomps on Hobbs’ right leg.

It ultimately takes five officers to handcuff Hobbs, who’s subsequently brought to his feet and escorted out. He was arrested for resisting arrest and obstruction of justice. He was not officially charged for any crimes outside of the interaction with Huntsville police.

According to WAFF, Kimberlyn Hayes, Hobbs’ mother, spoke to new outlets alongside attorney Martin Weinburg on Tuesday. “I don’t know what happened,” Hayes said. “Somebody sent me the video, and that’s how I found out what actually happened.”

WHNT News 19 reports that Hayes said her son was diagnosed with schizophrenia.

“The crime was panhandling, or you know, something along those lines, which we understand is the case,” Weinburg said in the press conference. “There is no reason this is appropriate use of force. And it could have been a lot worse.”

According to WAFF, Turner began recording the incident after he heard police struggling with Hobbs in the back of the convenience store.

Hunstville city council member Devyn Keith wrote in a tweet reply to the video that a review of the incident “has been sent.” “This is unacceptable and takes away from the controlled efforts of his fellow officers,” Keith wrote. “There must be public accountability with clear examples like this.”

According to WHNT, police hit Hobbs with a stun gun in October after claiming he “matched the description of the offender” in a domestic call.

Huntsville Police Department said in a statement to WHNT that an officer called for backup to the store when Hobbs was “non-compliant.” The statement said officers’ actions during the arrest are “under review.”

It appears to be another incident in which police are ill-equipped to deal with people with mental health disorders. According to the Treatment Advocacy Center, people with mental illness are 16 times more likely than other civilians to be killed during a police interaction.