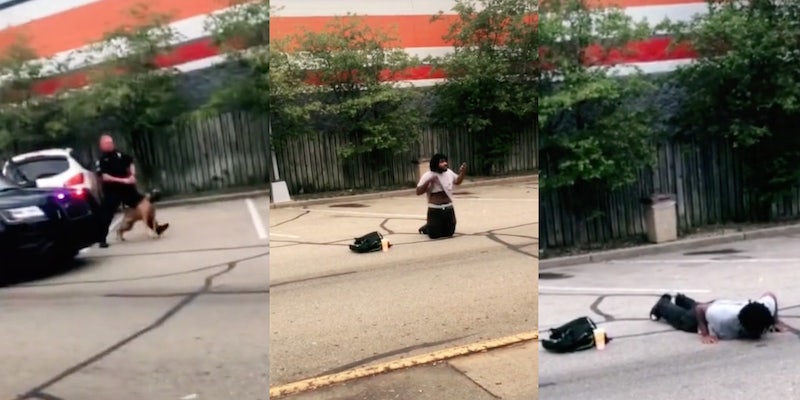 The man's co-workers attest he was working at the time of the robbery.

A video has surfaced showing a group of officers in Grand Rapids, Michigan allegedly arresting a Black man outside of a McDonald’s for a robbery that he reportedly had nothing to do with.

The video was originally uploaded by Facebook user Yfn Jayy and has since been reposted on TikTok by @alytheeactivist. The video has garnered more than 177,000 views since it was uploaded to TikTok on Monday. Jayy’s video was not available on Tuesday, and it’s not clear why the video was removed. The Daily Dot has reached out to Jayy and will update the report if they respond.

The video shows the man, who has been identified as Isaiah by his mother Misheal Butts on Facebook, in the parking lot outside a McDonald’s.

It was recorded from inside the store, and a woman is heard saying to the police that Isaiah works at the restaurant. She tells them he was at work at the time the robbery was reported.

“He just came in here to get his check, he’s been in his job for two hours,” says the woman through the window of the store. “And they talk about somebody just robbed the building 30 minutes ago—he’s been in this building for two hours.”

Meanwhile, there is chaos outside as Isaiah is seen on his knees, trying to reason with the police. He tries to lift his shirt, seemingly in an attempt to show that he is not carrying anything on him. At this point, civilians surrounding him ask him to “just lay down.”

He lies on the ground on his chest as his co-workers advise him not to move. One officer then comes out with a dog from one side, and a group of other officers starts marching towards him from the other side, setting everyone into panic.

“What the fuck is wrong with you?” bystanders are heard screaming at the officers.

TikToker Aly, said in the video that he was stopped by police because he “fit the description” of a suspect in a robbery that was reported nearby.

Despite the managers attesting to his presence at work during the time of the robbery, “the Grand Rapids Police Department decided to hold him at gunpoint and arrest him,” she said in the video.

She added that he was made to stay in the jail overnight and charged with misdemeanor and felony.

A member of the Grand Rapids Police Department confirmed his arrest with the Daily Dot, but the detective in charge did not immediately respond to the Daily Dot’s request for further details on the issue.

In the comments on Aly’s video, many expressed their frustration.

“Why they needed 20 officers and a dog to arrest one person,” wrote one user.

“they need to understand that we aren’t looking away anymore,” wrote one user. “we’re watching, and if they do something the whole world will know.”

A user named Taflora Tate responded in the comments saying she provided security video to the officers showing Isaiah in the store at the time of the robbery, but it did not make a difference.

“Before they even arrested him we told them we had the footage but they [weren’t] trying to hear it,” she wrote. The Daily Dot could not independently verify whether Tate is his manager, and she was not available to comment.

The Daily Dot has reached out to Butts and will update the report if she responds.