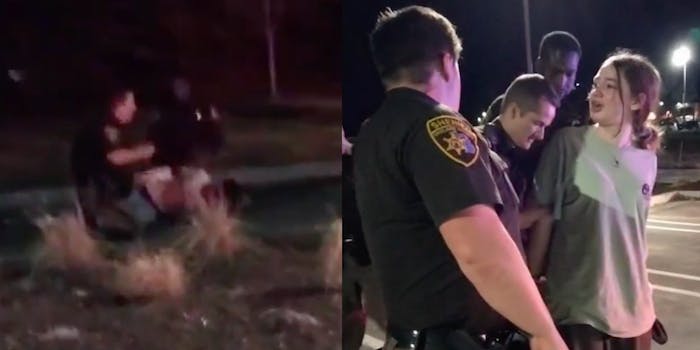 The man's stepmom pleads with the officers in the viral TikTok video.

A series of videos surfaced showing a group of police officers arresting a 21-year-old man, who reportedly is autistic and has bipolar disorder, anger management, and heart murmurs. At least one video shows the officers kneeling on him as he cries out for help.

TikTok user @samparker545 shared the series of videos on Sunday and has since been posting updates. According to the Oakland County Sheriff’s Office, the incident took place on Saturday when a deputy identified Austin Dockter during a traffic stop.

The TikTok user, who goes by Sam, said their brother, Dockter was arrested in Lyon County, Michigan, as he had three warrants against him.

The sheriff’s office confirmed with the Daily Dot the warrants, which include stealing/retaining computer to commit crime, unlawful driving, and driving without a license.

In one video, Dockter groans and asks for help as at least two officers are kneeling, apparently on him.

“I’m recording it,” says Michelle Zanger, who told the Daily Dot that she is Dockter’s stepmom and was the one recording. Zanger did not respond to the Daily Dot’s request for further comments.

Sam later said in another video that Emily is their 14-year-old sister.

“Y’all shouldn’t use shit on him,” Emily continues screaming while Dockter is heard groaning.

In another video, one person is heard screaming for help as a few cops hold them back. According to Zanger’s comments from behind the camera, the person seems to be Emily.

According to Sam’s comments, there were four more officers who “went after (Emily)” because she was “obstructing justice.”

According to the sheriff’s office, Dockter’s sister allegedly “pulled him away from deputies” from the backseat and tried to open the door to “create a point of escape.”

In the video, Zanger keeps asking Emily to return to the car and is seen running to another location where Dockter, who is also heard groaning, is being detained.

The sheriff’s office claimed the officers ordered Dockter to come out of the vehicle numerous times and attempted to use the taser on him to get him to comply. Dockter allegedly tried to flee on foot, which is when officers got a hold of him and tased him.

In another video, Emily gets handcuffed by police. When she demands to know why she is being arrested, the officer accuses her of “interfering.”

“When you pulled him back, that’s interfering,” one officer says to her.

Emily denies doing so, and she is pushed out of the frame.

Sam acknowledged in a video posted on Wednesday that Dockter had three warrants out for his arrest.

They blamed Dockter’s “crazy ex-girlfriend” for the warrants, alleging she has a history of “making accusations against him.”

“She has been stalking us for a while now, following us whenever we moved,” they said. “Earlier that day she called the cops on our house saying we were harboring a fugitive and saying Dockter was abusing his current girlfriend.”

Sam said in one video, posted on Monday, that they understand their brother was arrested due to the multiple warrants but that the nature of the arrest was excessive.

The TikToker linked to a GoFundMe they seemingly created.

On the GoFundMe, they claimed that the officers tased Dockter while he was still in the van and “dragged him out and tased him again.”

Sam said they are raising funds for legal fees as well as to transfer Dockter to a facility where he can start taking medication. It has raised $230 of its intended $25,000 goal so far.

The sheriff’s office said Dockter was initially taken to a hospital before he was cleared and taken to jail. It also said Emily was also taken into custody but that she was later released on the scene.

The Daily Dot has reached out to Sam.

Editor’s note: This story has been updated to describe the man’s developmental disorder as autism.