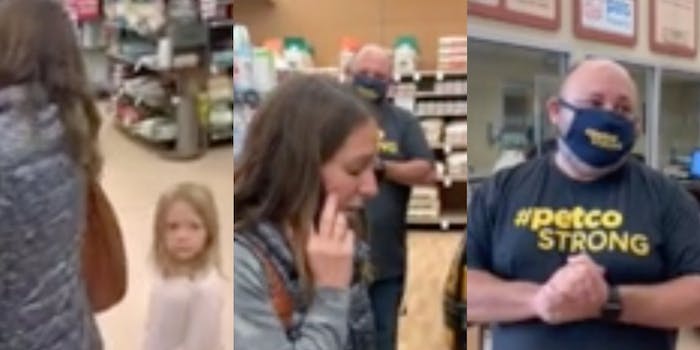 She claimed the employee was 'stalking' her.

In a video shared to Reddit on Wednesday, a woman dubbed “Petco Karen” appears to call 911 or another hotline on an employee for “stalking” because he asked her to wear a mask.

The video, posted on the r/PublicFreakout subforum, starts with the woman on the phone while trying to pick up a large bag of pet food. The woman is accompanied by a small child, and neither of them are wearning. An employee of the Bonney Lake, Washington, store is also nearby.

She says to an apparent 911 operator, “I have a gentleman who’s stalking me inside the store, and I’d like to report it, please.”

“He’s complaining that I’m not wearing a mask, and he won’t leave me alone,” she says. Wearing masks indoors is mandatory in Washington.

But the turn comes when she tells the police that she was maintaining distance and that she had a medical reason for not wearing a mask.

The employee hears this and quickly says, “You didn’t tell me that, though.”

The woman also says, “[the employee] is not being very nice to me either.”

The woman tells the operator her name and asks the man to stop filming. But he says he’s from “the news” and continues filming. She complains that he’s recording without her permission. (If he can verify he’s with a news organization, he is legally allowed to record the events.)

The employee thanks the videographer: “That’s why we have big giant signs outside the door.”

“Well, she’s endangering my life,” he says before she asks him to back up. “I have a heart condition, COPD, asthma.”

He asks the employee: “Are you guys actually going to sell to her?

The employee says no because the woman hadn’t shown documentation of a medical condition. The video ends with the woman trying to put the bag of pet food on the counter.