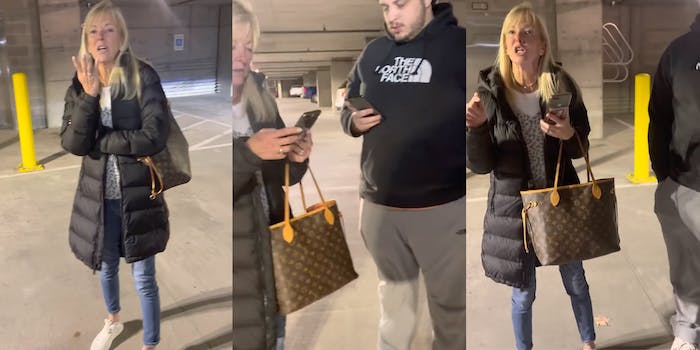 'I don't care what color you are.'

A viral video shows a white woman and her son shouting at a Black employee that he didn’t “belong” in the secure garage of their Nashville apartment building on Saturday night. After the white man appeared to attack the man filming, the white woman called 911.

The cellphone footage was posted on the subreddit r/Karens and YouTube by Johnny Martinez, who goes by @Medium-Smell-6195.

Martinez filmed the confrontation between himself and a pair that he calls a “Karen and her son” that ended with a 911 call. He said the two were “racist people” who “assaulted” him because he’s Black.

According to Martinez, the event took place a little after 8pm while he was working at his job and checking car permits in the parking garage of the River House apartments in Nashville.

The white woman and man followed Martinez around before the woman allegedly said, “You don’t belong here, how did you get in here?” Martinez said he told her that he was on the premises for his employer, but they didn’t believe him. In the video, they press him to explain why he’s there, if he lives there, and how he got inside the parking garage.

“Mom, stay away from the dangerous man,” the white man says during the encounter.

At one point, the white man tries to knock the phone out of Martinez’s hand, and the two threaten to call the cops.

“I’m going to press charges because you attacked me,” Martinez says, encouraging the woman to call the police.

The woman apparently calls 911 and says into the phone, “There’s some gentleman down here, and we asked him what he’s doing down here, and he says it’s none of our business. He’s kind of gotten nasty toward us so we’re trying to figure out why this person’s in the parking lot.”

She and her son say Martinez, who appears to work for a third-party company, refused to show them identification.

While she’s on the phone, Martinez says, “Tell them it’s a Black man walking.”

The woman replies, “I don’t care what color you are.”

The white man and woman eventually leave the garage via the stairs, and Martinez ends the video shortly after.

“After the encounter I waited at the property about 40 minutes for Metro PD where I filed a police report and will be pressing charges,” Martinez wrote in the YouTube video description. “The Karen had also called the police and conveniently left out the fact her son assaulted me.

“For the record when they first engaged me I had told them I was working and had my ID hanging off my neck. They knew what I was doing and just wanted to demean me by telling me I didn’t belong and trying to force me to show them ID.”

A spokesperson for the Metropolitan Nashville Police Department told the Daily Dot that an officer arrived at the scene and saw the video but that Martinez has to go to the District Attorney screening system to press charges. The officer also spoke to the white man and woman, who said they felt threatened by Martinez after a string of burglaries took place in their apartment building and will not be pressing charges.

“The racist tropes they used turned me off to engaging them in that way,” Martinez wrote in a comment on Reddit. “We hear it all the time ‘you don’t belong here’ is just another way for these people to say go back to your country in my experience. All I was waiting for was the N word to seal the deal.”

The Daily Dot has reached out to Martinez and the River House apartments in Nashville for comment.