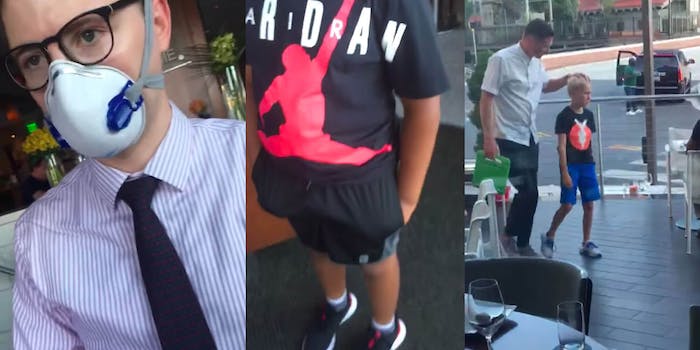 The restaurant group apologized after the video went viral.

A restaurant in Baltimore has apologized after a video went viral of a Black child being denied entry because of its dress code, while a white child was let in with no problem. The two children were similarly dressed.

In the video, a Black mother and her 9-year-old son are denied service at Ouzo Bay because her son was wearing athletic shorts, a T-shirt, and sneakers. A white child, who is wearing a similar outfit, can be seen leaving the restaurant with his family.

The manager at Ouzo Bay tells the mother in the video, Marcia Grant, “Unfortunately, we do have a dress code” and suggests her son change. Grant pans the camera over to the white boy, who seems to have had no issues being served with his family.

“I have faced racism time and time again,” she wrote. “But it’s hard AF, when you have to see your child (9yo) upset because he knows he’s being treated different that a white child!!!”

The restaurant group, Atlas, called the incident “disturbing” in a statement released on Monday.

“This should never have happened, the manager seen in the video has been placed on indefinite leave,” it wrote. “We are sickened by this incident. We sincerely apologize to Marcia Grant, her son and everyone impacted by this painful incident.”

Atlas also wrote that the dress code was “a result of ongoing input from customers,” and it never intended for the guidelines to be discriminatory. It announced that it will be “immediately” amending its dress code, writing, “Children 12 years and younger, who are accompanied by an adult, will not be subject to a dress code at any Atlas property.”

Atlas ends by saying it has offered to meet with Grant and her son to discuss the incident. This is not the first time the restaurant group has faced criticism for its dress codes. Back in September of 2019, the Associated Press reported one of its restaurants, The Choptank, banned “baggy clothing, sunglasses after dark and bandannas.” Atlas changed The Choptank’s dress code after receiving criticism.