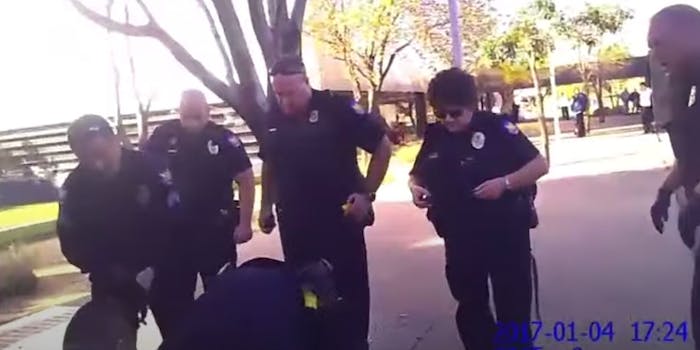 Newly released footage shows Arizona officers mocked a Black Muslim man who called out for “Allah” while being restrained. Police killed the man during the 2017 altercation.

The video, released by AZ Central, shows Phoenix police pinning down 43-year-old Muhammad Muhaymin Jr., a Black Muslim man, during an arrest as he cried out for help.

While pleading, Muhaymin at one point called out to Allah, when an officer mocked him and said, “Allah? He’s not gonna help you right now, dude, so relax.”

The 8-minute video shows an officer addressing a situation where Muhaymin is seemingly trying to use the bathroom at a city community center but was stopped because his dog wouldn’t be allowed in.

The video begins with Muhaymin trying to have a conversation with someone from the center. “Can I use your restroom, please?”

A conversation ensues about his service dog not being on a leash. The video then cuts to the officer walking him out.

According to AZ Central, after cops were called regarding the situation, they learned there was an existing warrant for Muhaymin’s arrest and thus were going to detain him.

In the video, as Muhaymin is being escorted away, the officers can be heard having a conversation with him about his dog.

“Put your hands behind your back,” says another officer.

“Please,” Muhaymin Jr. pleads. “Why are you doing this?”

“Put him up against the wall here!” says one officer, and Muhaymin is heard screaming.

As he continues to cry and scream, an officer says, “Relax dude!”

“You need to relax bro,” says another officer.

At least six officers are seen at the scene. Later in the video, one officer is seen kneeling on Muhaymin’s back, and another steps on his palm as they try to restrain him.

According to the Huffington Post, Muhaymin was killed in January 2017, but the incident has resurfaced amid the recent uprising against police brutality following the police killings of George Floyd, Breonna Taylor, and numerous others in 2020.