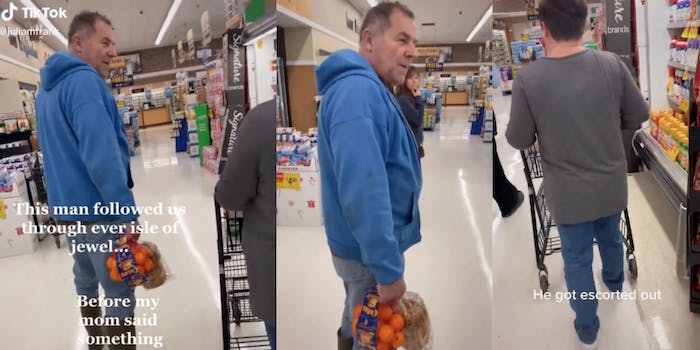 'Stop staring at my f*cking daughter's a**.'

One woman when full mama bear on a man who was following her daughter through a grocery store.

Twenty-one-year-old Julia Frank alerted her mom, Stephanie Ibarrondo, after she noticed the man was following them through a grocery store and “staring” at her, making her feel “uncomfortable,” according to BuzzFeed, which spoke with Frank.

The man was then caught looking at Frank’s butt as she walked by, prompting Ibarrondo to confront him. Yet, he continued to follow them through “every aisle,” leading Ibarrondo to kick off once more.

A now-viral video, with more than 18 million views, shows the second confrontation go down. In the video, which was recorded by Frank and posted to her TikTok, Ibarrondo can be heard calling him a “dirty old man.”

“Stop staring at my fucking daughter’s ass,” she says to him.

Ibarrondo then tells him to get away from them. Frank, who was also with her cousin and sister, even chimes in to also tell him to “get away.”

“Dress like a wh*re, you should look at a wh*re,” he responds.

(Not that it matters, but Frank noted in her TikTok that she was wearing “sweatpants and a baggy shirt” at the time.)

A store employee then approaches the group, and Ibarrondo tells them the man was staring at Frank’s butt and is now following them.

The man was ultimately “escorted” out of the store.

The Daily Dot has reached out to Julia Frank.