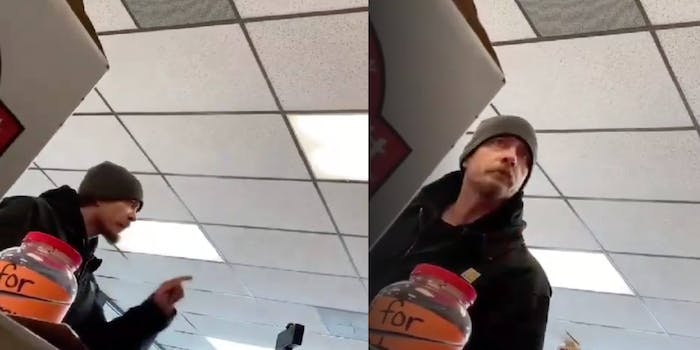 The manager threatened the woman—and his own father.

A viral video shows an alleged liquor store owner and his son, a manager, berating an employee as she’s being fired. The son, identified as Jason, is seen in the video yelling at a woman and calling her “fucking worthless.”

Facebook user Dominick Lorenzoni, who said his daughter Kayla is the former employee, posted a video of the incident that took place at Liquor Warehouse in Rome, New York.

The 13-minute video has garnered thousands of angry reactions and responses, with many criticizing the owner for defending his son’s explosive behavior.

A woman named Kayla Marie identified herself as the employee in the video’s comment section but did not respond to the Daily Dot’s request for comment. The Daily Dot could not independently verify her status with the store.

The video begins with the older man, who Lorenzoni says is the store owner and the father of Jason, telling the woman she “created a scene.”

She denies this and says, “I sat in that chair while he was standing behind my back screaming in my ear.”

She says she asked Jason to stop yelling, but he began “flipping out.”

“He got mad that I asked him a question that he didn’t like,” the woman says, explaining that she asked him how it’s fair that she “get 30-minutes” while others get “almost an hour” for breaks.

“I can apologize for asking a question that triggered him but other than I didn’t do anything wrong,” she adds later.

“You’re still missing the point,” the father says. “I can’t have this type of an environment in my business. So I’m gonna have to let you go.”

“Fire me?” the woman responds.

“No, laid off due to lack of work,” he says, adding that “business is slow.”

Shortly after, the woman says “he’s here” before a man walks in and starts yelling.

“I’m gonna have you arrested,” the younger man is heard saying. “Get off the property.”

“I ain’t fucking putting up with this,” the younger man says, raising his voice. “You’re not gonna fucking discriminate against me for being a man. Or I will sue the fuck out of you and make you lose this business.

He’s also heard threatening the woman, saying he will “physically” move her from there “like a fucking bouncer” if she doesn’t leave.

“If I were a woman, or you were a man, I’d catch your ass in the saloon,” the younger man says to the woman before leaving the frame of the video to make room for customers.

After the customers leave, the older man says to the woman, “You really freaking pissed him off.”

The video has received more than 126,000 views. On Facebook and Yelp, people have left reviews on the store’s page criticizing the behavior.

“The manager is verbally abusive to his employees and to his father (the owner),” one user wrote on Yelp. “As a woman, I wouldnt (sic) be comfortable going there again and I do not recommend anyone going there and supporting this behavior.”

“After seeing video footage of how the manager treats his employees I would never enter this store! I would be terrified of being hurt by him!” a reviewer wrote on Facebook.

A petition created on Change.org requests that the business be closed down or handed over to other management.

A person who answered the store’s phone on Monday but did not identify themselves said they can’t comment on the issue because the video was “posted illegally” on Facebook.

The person said they can’t discuss the video as there’s “an ongoing investigation.” Asked if the business took a hit because of the video, the person said it was “nothing noticeable.”

As for the negative reviews on Facebook, the person said, “Anything could happen. A mosquito hits the windshield of a car, someone posts it on Facebook and the whole world will go, ‘Oh my gosh, the poor mosquito.'”

“Everything is so goofy with Facebook. I’m done with this call,” the person added before hanging up.