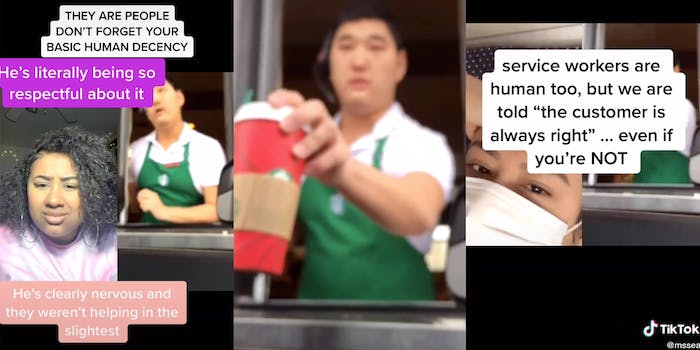 'How evil can you be to make a barista cry over your Starbucks latte and then film it.'

A new TikTok is shedding light on the mistreatment of service industry workers.

The video, which was originally posted on TikTok about five days ago, recently made rounds on Twitter, and it shows a Starbucks barista choking back tears after an interaction with a customer.

In the video, the barista is seen giving a customer the business card for the location’s manager, then apologizing for the service not being up to the customer’s satisfaction.

“Sorry we didn’t meet the standard of quality you were hoping for today,” the barista said.

The customer, who is not visible in the video and appears to be capturing the ordeal, continually repeats, “That’s a free drink.”

After giving the customer their drink, the barista then tells the customer to have a wonderful day, appearing to suppress his tears, as he slams the drive-thru window.

The video was posted by the TikTok account “PublicFreakoutVideos.” The owner of the account told the Daily Dot a viewer submitted the video, and they are not aware of the identity of the barista or customer. As of now, the video has about 2 million likes on TikTok and more than 16,000 comments. Multiple comments were sympathetic to the barista, accusing the customer of treating him harshly.

“Ok but honestly, if they recorded him they must (have) been the ones doing something wrong, he really did try to keep his composure in this,” user @eemanimonoarfaa said, garnering almost 36,000 likes on the comment.

The TikTok was later posted to Twitter by user @shesinscrubs, who goes by Sarah. Upon inquiry, Sarah said the barista in the video has requested anonymity.

“This video broke my heart. … I don’t understand why people feel so entitled to treat people in the service industry so poorly,” Sarah said in a tweet she posted with the TikTok. “Like how evil can you be to make a barista cry over your Starbucks latte & then film it.”

Stop being so mean to people in the service industry/customer service industry. I will never understand why people feel so entitled to treat workers so poorly and verbally/mentally abuse them. https://t.co/rnomb3DKgq

TikTokers have also showered the Starbucks’ barista in support, citing their own unpleasant experiences when dealing with customers.

Starbucks did not immediately respond to the Daily Dot’s request for comment.