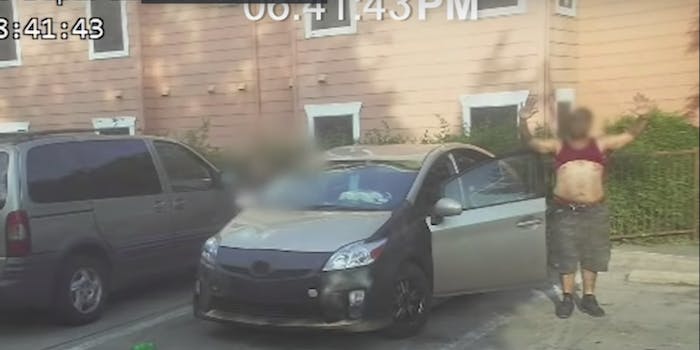 A transcript of the 911 complaint that led police to Mike Ramos was also released.

Bodycam footage showing the April police shooting of Mike Ramos, a Black and Hispanic man, has been released.

The footage, taken by Officer Darrell Cantu-Harkless’ bodycam and released by Austin Police Department on Monday, shows the 42-year-old following officers’ orders and repeatedly telling them he was unarmed while sitting in his vehicle in an Austin parking lot.

The footage shows that the incident lasted at least seven minutes and that officers shot at Ramos multiple times throughout. The officer who fired the fatal shot was identified as Officer Christopher Taylor by KUT.

Police were responding to 911 complaint of “an incident” in the parking lot, where Ramos was located.

The transcript of the call, which was also released in the same video as the bodycam footage, shows the caller complained about someone inside a car “smokin’ crack and cookin’ meth.” The caller said there was a Hispanic man and woman in the vehicle and that the man “had a gun to this lady,” adding they had toilet paper “in the front.”

The bodycam footage shows five officers on the scene, planning how to approach Ramos.

“So, we’ll go—I have my rifle on me,” Cantu-Harkless is heard saying. “Everybody has rifles.”

APD confirmed in a statement, which was included in the video, it “mobilized several units” to address the 911 call and identified the responding officers: Christopher Taylor, Mitchell Pieper, Cantu-Harkless, Benjamin Hart, James Morgan, Karl Krycia, Valarie Tavarez, and Katrina Ratcliff.

The officers “directly engaged 42-year-old Michael Ramos as he stayed inside his vehicle,” APD said in the statement.

The video shows Cantu-Harkless’ vehicle pulling up to Ramos’. Several officers, including Cantu-Harkless, scream at Ramos to get out of the vehicle with his hands up.

“Hey. Let me see your hands on the ground. Do not move,” one officer says, while the car remains stationary, and no apparent movement can be seen inside.

“Hey! Hands up!” one officer says, amid a slew of other inaudible instructions.

Ramos slowly emerges out from inside of the car, and Cantu-Harkless, among other officers, orders him to keep his hands up.

“Michael Ramos! You’re gonna listen to everything we say,” Cantu-Harkless screams. “You need to listen. Keep your hands up!”

Ramos tries to say something, but he is interrupted by Cantu-Harkless, who exclaims, ”Keep your hands up!”

“I want you to lift up your shirt for me slowly,” he adds.

Ramos lifts up his shirt, and, as per the officer’s direction, he turns around in a circle slowly.

“Walk towards me,” Cantu-Harkless says.

Ramos tries to say something again but is cut in by the officer: “Michael Ramos, you’re going to get impacted if you don’t listen. Walk towards me.”

Ramos appears distressed and, again, tries to say something. Cantu-Harkless asks him to relax and “turn around.”

Ramos continues to try to say something while inching back toward the open door of his car.

“I want you to turn around for me, Michael,” Cantu-Harkless says.

Ramos, with his hands still up, rests them on his hand and exasperatedly says, “What the fuck man?”

“Man, what the fuck did I fucking do man?” Ramos says. “The fuck you tripping on, dog?”

Ramos continues to ask what he did and reiterates he doesn’t have a gun, while the officers repeat their orders for him to remain still.

Then, an officer shoots at him while his hands are up. KUT reported in May that this was a non-lethal “bean bag” round.

Ramos screams, retreats into his car, and closes the door.

“Hey do not move!” Cantu-Harkless screams. “Turn off the car, Michael. Don’t do it! Michael get out.”

Ramos then drives away, and shots are fired at his car. Two officers are seen walking toward Ramos’ car with assault rifles, and Cantu-Harkless follows.

When they catch up to Ramos, Cantu-Harkless is heard ordering him, “Let me see your hands on the left. Do not move! Hands up!”

Ramos remains off-camera for the rest of the video but is heard screaming, “What the fuck!”

“Get out of the car! Hands up!” Cantu-Harkless says.

For the next few minutes, Ramos and other officers are heard screaming at one another. Ramos pleads with them to not shoot, repeating he doesn’t have a gun on him.

Meanwhile, Cantu-Harkless is heard discussing with other officers which “angle” to take.

“Impact him!” he orders at one point.

Another officer orders, “Impact him!”

Police fire shots and loud screaming can be heard. Officers continue to order Ramos to get out of the car.

The video statement states Ramos was then taken to a local hospital, where he was pronounced dead.

On Monday, APD Chief Brian Manley released a statement regarding the incident and linked to the video, saying the department is “committed to transparency and will continue our work in building trust with the community we serve through information sharing.”

According to KUT, in addition to George Floyd and Breonna Taylor, Black Lives Matter protesters in Austin are also demanding justice for Ramos.

In May, KUT reported that Manley confirmed officers did not find a gun in or around Ramos’ car.

The video was released after a policy, which requires APD to release footage of incidents that involve serious injuries, was adopted in May.