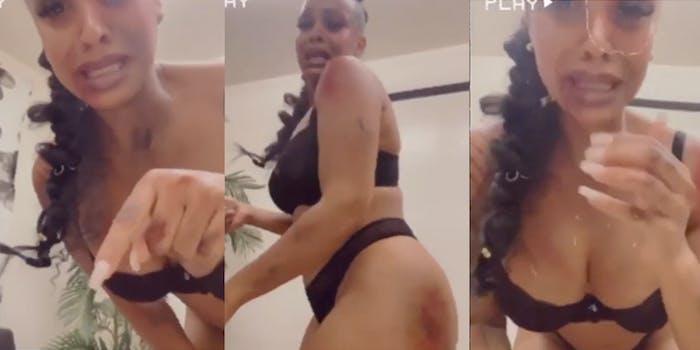 Former Love & Hip-Hop: Hollywood cast member Masika Kalysha is facing backlash for a publicity stunt that promoted her OnlyFans account. She claims it was an attempt to bring awareness to child sex trafficking.

According to TMZ, in a now-deleted Instagram video posted on Tuesday, the actress is seen in lingerie with bruises and cuts on her face and body. In the clip, she says that she was “beaten and kidnapped” and is being held hostage with her only means of escape being $100 OnlyFans tips.

“Guys I got beat up. I don’t know how much time I have,” she states in the video. “They said that you guys have to leave me tips and follow me so they can take the money or they’re not going to let me go… tip me $100 each or they’re not letting me go.”

In a later Instagram story post, Kalysha said, “that’s a wrap on day two. Blood and dirt removed, hair washed, back to normal,” seemingly claiming that the cuts and bruises shown in her post were just set makeup for an ongoing production about sex trafficking.

According to TMZ, the original video was deleted before the former TV star posted a follow-up explaining that the original clip was meant for “shock factor” and to convey the seriousness of sex trafficking.

Kalysha said she’s acting in a new production that will bring awareness to the issue. “I’m sorry if I scared you… I’m totally fine guys,” she can be heard saying in the video.

She then shared an infographic on child trafficking recruitment methods to her Instagram Story. The graphic was followed by a fan repost captioned “#endhumantrafficking, understand what she was trying to do and leave it alone lol.”

Shortly after, Kalysha made additional story posts that showed a makeup artist creating the same cuts and bruises that were depicted in the original video.

Toni Rivera, the founder of the anti-sex trafficking R.O.S.E. Organization that Kalysha mentioned in her stories, said on Instagram on Wednesday that the organization had nothing to do with Kalysha’s video.