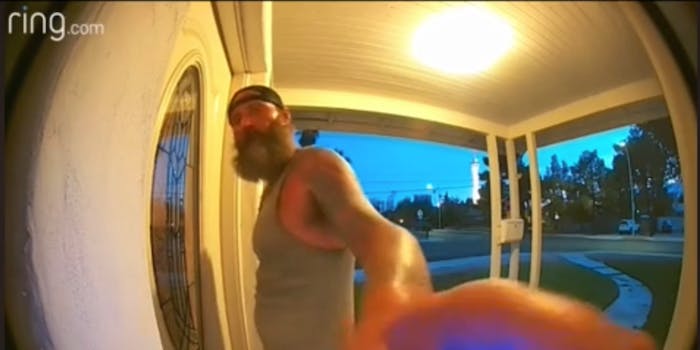 Video: Man tries getting into house, threatens to rape and kill homeowner

A woman hid inside her house until the unidentified man walked away.

A Ring doorbell video of a man threatening to rape and kill a woman in her home led to an arrest in Las Vegas, Nevada on July 22, according to Las Vegas 8 News Now.

In the video, the man can be seen and heard repeatedly saying, “Are you sure? Are you positive? I just have a few questions for you.”

The homeowner, a woman named Amanda Nowak, posted the video to Facebook in a now-deleted post in which she wrote that she hid in her home while on the phone with a 911 operator when the man was knocking on her door.

Her husband, who was not home, spoke to the man through the Ring doorbell intercom and asked who he was. The man’s response was to threaten Nowak’s life.

“What I’m looking for is the girl in the house cause I’m going to rape her and kill her. Can you have her open the door?” the man asked, adding that he had a gun and a knife.

The man left the home shortly after, walking away and down the street. He was later arrested after someone recognized him from photos shared on social media, according to Las Vegas 8 News Now.

The Daily Dot has reached out to Nowak and the Las Vegas Police Department regarding the arrest. Las Vegas 8 News Now has reported that the man remained unidentified and was booked as a John Doe.