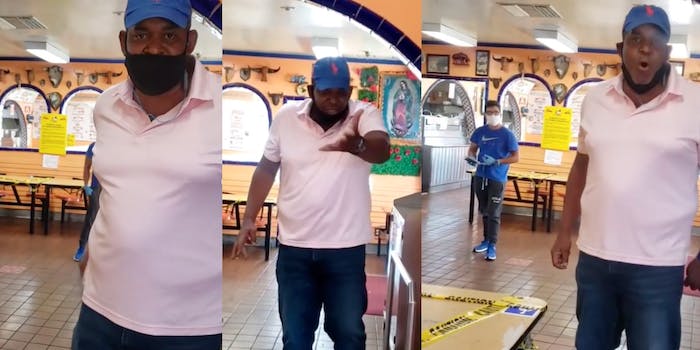 In the video, he shares his full name, SSN, and date of birth.

A man at a California restaurant hurled racist abuse an Asian-American woman after she declined to go on a date with him, according to an Instagram post she shared on Tuesday.

Instagram user HD Lee posted a video of the incident, along with her account of what happened.

Lee said that as she waited for her food at El Taurino, a restaurant in Los Angeles, the man next to her gave her his card and asked her to have lunch with him. She declined and told him that she’s married. He “snatched his card back” in response and started verbally attacking her.

Later in the video, the man identifies himself as Frederick Douglas Smith. The Daily Dot was not able to independently verify his identity.

In the video, Smith is heard calling her a “bitch” and asking her, “What the fuck is the matter with you?”

He yells at her for using her phone to record and subsequently takes out his phone to also record.

“Wow,” Lee is heard saying from behind the camera.

“I’m sorry, can you help me? He seems very abusive right now,” she seemingly says to the employees at the restaurant.

In the background, Smith can be heard saying that she should “go back to Asia.”

Smith continues calling her a “fucking bitch” before lowering his phone and turning to leave.

He then takes his face mask off and shares identifying information about himself, such as his full name, social security number, and date of birth.

“Can you… can you help me, please,” she says again, as Smith inches closer to her. ‘This seems really scary.”

“Ain’t nobody gonna help you! Police can’t do shit to you in front of me,” he yells at her. “Not a goddamn thing.”

“I’m a contributor to the Obama administration,” he continues yelling. “You fucking Asian c*nt! Get the fuck outta here!”

“Oh my god,” Lee says as she starts crying.

Smith turns around and continues screaming, “What the fuck is the matter with these fucking hoes.”

He then turns back again, yelling, “I mean look at you. You ain’t even fine. You look like shit.”

A few employees are seen trying to talk to him, though what they say is inaudible in the video.

One of the employees politely guides him away from Lee, as Smith screams, “Black lives matter.” Lee’s post did not mention Smith’s ethnicity, but the IB Times identified him as a Black man.

Lee is heard crying uncontrollably behind the camera.

“This is so sad,” an employee is heard in the distance, talking to Smith.

Lee said he “almost physically assaulted” her as well.

Lee said she tried to file a report with the Los Angeles Police Department, and it said there’s “nothing they could do to address the situation.” Lee did not respond to the Daily Dot’s request for comment.

In her post, she said that during these times, it’s more important than ever to be kind to each other.

“I hope and pray that someone can recognize this man so he can get the help that he desperately needs before another person is attacked,” she said.

The LAPD considers an incident “hate crime” if it results in an injury, or if there’s a threat “of violence that looks like they can be carried out,” property damage, or any attempted criminal activity because of one’s identity.

The Daily Dot was not able to independently confirm why Lee’s request to file a report was denied. The Daily Dot has reached out to the LAPD’s Rampart Division, the jurisdiction where the restaurant is located, and will update this report if it responds.