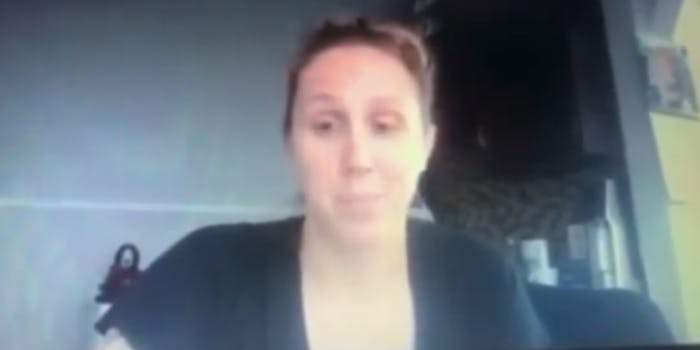 A viral video shows a white lecturer at the State University of New York College at Buffalo say she’s “sick” of talking about Black Lives Matter to her class.

According to the Buffalo News, student Jahnay Morehead recorded the lecturer’s comments in a writing course in the fall and shared them with the college diversity committee.

SUNY Buffalo State College says the institution will investigate comments made by the lecturer, identified as Erica Cope.

The 20-second video clip was posted to @shadedailynews on Instagram and subsequently made rounds on social media rounds.

In the video, the instructor says, “This is me speaking honestly, and you guys have to respond honestly with what you think, with what you feel about this. So I am sick of [inaudible] about Black Lives Matter. All right? I said it.”

According to WGRZ, Morehead said that the writing course session involved sharing opinions that “might be considered controversial.”

“After she said that, she was kind of trying to change the topic very swiftly,” Morehead told the station. “A lot of students was like, ‘Why? Why do you feel this way?’ And she really didn’t want to go into it.”

Cope reportedly referred inquiries about the incident to the Foundation for Individual Rights in Education, a nonprofit organization concerned with free speech and other rights at institutions.

An attorney with the organization said context is necessary.

“We are concerned by the trajectory of this,” Adam Steinbaugh told the Buffalo News. “The 15 seconds of an hour-long or so class is not enough to make a judgment call about not only her point but about whether or not this is protected speech.”

However, the university’s position is firm, per a statement from school President Katherine Conway-Turner.

“Let me be absolutely clear—Black Lives Matter at Buffalo State College,” Conway-Turner said in the statement. “The viewpoint expressed in a video circulating online by a part-time instructor clearly runs counter to all that we stand for at Buffalo State.”

Conway-Turner appointed chief diversity officer Crystal Rodriguez to investigate, and the university has yet to discuss its findings. Student Government President Jennie Mauk told WIVB she’s curious about what Buffalo State decides as a resolution.

‘We’re just looking to see what next steps are and then how we can advocate for that change to be made, and make sure education is based around those discussions and not dismissing experiences,” Mauk said.