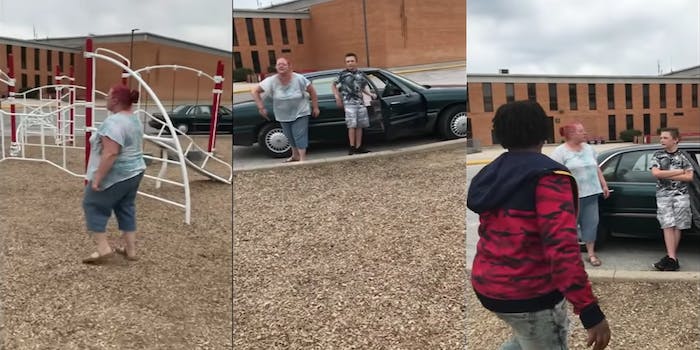 She also called the child the N-word.

Video footage shows a white woman chasing a Black child around an elementary school playground with a knife in Fort Wayne, Indiana.

The so-called “Karen,” a woman named Terra Roling, allegedly confronted the child with a knife and called him racial slurs. The altercation allegedly occurred after Roling’s son told her he was attacked by the other child.

Several other children can be heard in the video yelling unintelligibly after Roling called the child the N-word.

After the child apparently told someone else that Roling called him the N-word, Roling yelled, “Because you’re being one. A [N-word] is an ignorant person. Doesn’t mean you’re Black, dumbass.”

When told that she can’t use that word, Roling snapped back that she can say whatever she wants, citing “freedom of speech.”

The video footage shows Roling talking to her son after the incident and realizing that he lied to her in the first place about the other child attacking him.

“So after she chased those kids around the park, she discovers her kid was lying!! Whoa. Nuts,” one viewer commented on the video.

Another viewer said, “So her kid lied she chases these kids with a knife and there’s video evidence of this and the police don’t arrest her … am I missing something here.”

The incident took place on May 15, and the Allen County Prosecutor’s office charged Terra Roling with two counts of felony intimidation on Tuesday.

ChangeMakers of Fort Wayne, a local advocacy group, urged the public to contact local officials and demand action, WPTA reported this week. Daylana Saunders and Alisha Rauch from the organization say this is a part of holding people accountable.

“I was appalled, angry, sickened,” Rauch told WPTA. “The pressure that we were able to put on them and the support of our community made them able to charge her.”

As of Thursday, Roling was reportedly not in custody.