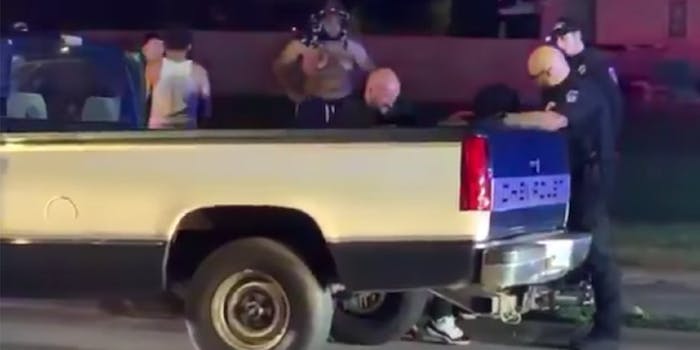 'Why did the dog get loose? He didn’t resist arrest.'

A Granite City, Illinois police dog bit a Black teenager’s leg for more than eight minutes and wouldn’t release the boy until officers hit it with a stun gun. The 17-year-old, Devondre Williams, claims he wasn’t even the person police were looking for when they stopped the pickup truck he was riding in around 2 am on July 19.

“I ain’t never scream like that a day in my life,” Williams told KMOV4.

Video footage posted on Facebook, which begins after the dog is already latched onto Williams, shows the teen flattened against the back of the pickup truck. The dog’s paws can be seen underneath the vehicle as several people watch. Unintelligible shouting can be heard, as well as loud—and clearly pained—screaming from Williams.

According to the Facebook post, shared by JD Dixon, an altercation a few blocks away prompted Granite City police officers to pull the pickup truck over, “and when the police saw the dark skin teen with long dreads, they automatically thought he was involved.”

“The underaged minor according to witnesses cooperated and gave the officers his name Davondrea Williams but thought he was lying because I guess his name was to black and they thought he was giving him a fake name,” Dixon alleges in the post.

After the officers asked Williams to step down from the truck and he reportedly was cooperating, an officer yanked him down without warning and shoved him up against the truck. In the process, the dog was reportedly released by mistake and attacked the teenager.

“There were just deep dog bites like right inside of his leg,” Williams’ mother Tabbatha Woods told VICE News. “They cleaned it out real good, and then they had to stitch it because it was so deep.”

As the dog bit Williams’ leg, the officer twisted his arms to put him in cuffs, according to Dixon.

A witness named Regeana Canada believes the dog was latched on to Williams’ leg for about eight to nine minutes.

“Williams nor any of the other gentlemen were resisting arrest,” Canada told VICE News. “My question is why did the dog get loose? He didn’t resist arrest, the boys didn’t cause any problems.”

“How VILE!!!!” one user commented. “We know that dog had solid training. A police dog wouldn’t be allowed on duty if it didn’t have a solid recall!!!!! Those officers knew what they were doing. A Tazer would make the bite harder and deeper before the dog can release the hold.”

“If the GCPD CAN’T control their dogs then they are ill trained and should NEVER be used!” another person said.

Granite City police made no arrests during the incident. The department has not issued a public statement regarding the incident and did not respond to the Daily Dot’s request for comment.

Police K-9 attacks cause more hospital visits than any other use of force by police, according to The Marshall Project. Cities like Indianapolis, Los Angeles, and Jacksonville reported as many as 220 police dog related injuries, according to the organization.