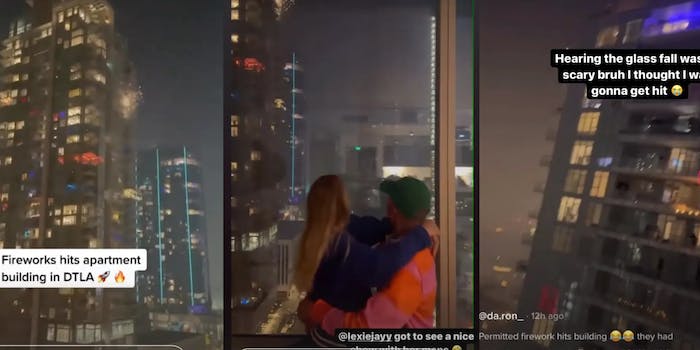 'I hope this gets to the right people for an insurance claim.'

A rogue firework set off in Downtown Los Angeles on July 4 exploded into a high rise apartment building, causing a small fire.

Several angles of the incident were captured on video and posted across social media. They all show an airborne firework exploding into a window of the building, igniting a small fire, and causing glass to rain down onto the street below. It appears that the firework was set off from a parking lot in between high rises.

Instagram user @chazzydawg captured the incident on his Stories. However, he assured viewers he was not a part of the setting off. He also reposted videos showing other angles that people sent to him.

“I hope this gets to the right people for an insurance claim 😅😂 #fireworksfail #dtla #ohno,” @lexie_jayy captioned a TikTok showing an angle from inside the apartment building near the one affected.

In a TikTok posted by @da.ron_, you can see the people who allegedly set off the firework run to get into a car and drive off.

According to ABC7.com, police were called to the scene but no injuries were reported.

The Daily Dot reached out to the Los Angeles Police Department for comment.