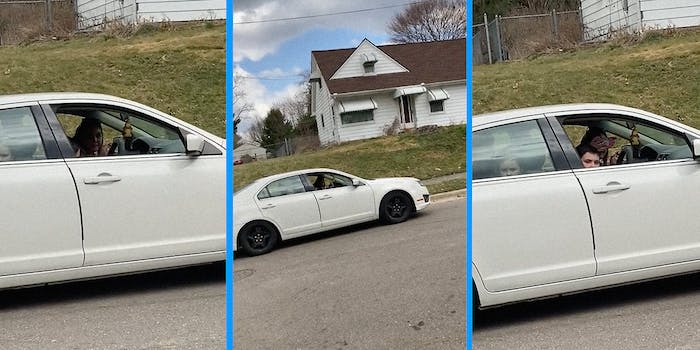 Video: Grown ‘Karen’ curses at 11-year-old for being ‘disrespectful’

A viral video shows a woman yelling profanities at an 11-year-old boy for being “disrespectful”—while she smokes a cigarette in a car with three kids.

“You’re not going to have a pleasant life. You are very, very disrespectful and you’re lucky I am not getting out of my car and smashing your phone,” the woman says. “You probably don’t even deserve to have a phone. You are not responsible enough, that’s for sure.”

The video was recorded by the boy, who stands across the street from the woman’s car. The woman accuses him of saying “hell” and “the F word” while raising her own phone to film the boy. There are three kids sitting in the car with her, one in the front seat and two in the back.

“You know that was a threat, right?” the boy says.

The woman in the video points her fingers at the boy across the street and shakes her head while she speaks.

“Look at this little redheaded stepchild mother fucking kid recording me,” she yells. “You know that you are not going to have a very pleasant life right?”

The video was shared to the Public Freakout subreddit on Wednesday, and more than 260 redditors commented passionately.

“She needs a nice ass whooping from that kids parents,” one user commented. “And she’s smoking in the car with her kids.”

Others felt the video perfectly highlighted the immense maturity of the young boy for responding calmly and handling himself well in the situation where a grown woman yelled expletives at him for cussing.

“‘You’re not going to have a pleasant life,’ she said, smoking in a car with her children while filming herself losing an argument to an 11 year-old,” one user commented.

“Any time an adult is legitimately arguing with a child they are so hilariously in the wrong,” another added.

The video clip ends with the woman quickly driving off in the Ford Fusion, which has two hubcaps missing.

“Saved money on the car so she could afford to buy seven new phones,” one user commented.