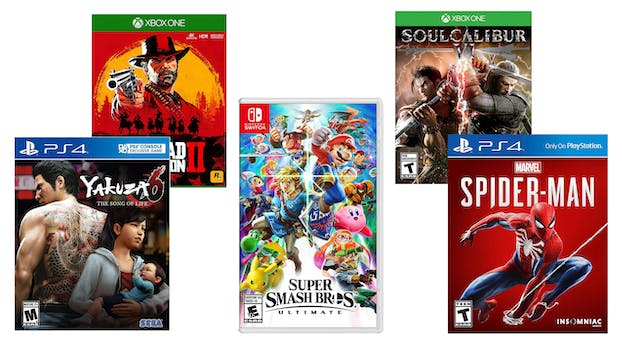 5 video games worth buying with your gift cards

We'll help you choose the best ones.

People say that gift cards are an impersonal thing to give, but they have clearly never felt the pain of having a video game wish list a mile long. If they did, they’d know being given a gift card means you can actually whittle that list down.

If you’re in that lucky position today, you may be overwhelmed of which of the games on your list to get. We considered this, which is why we thought we’d provide you with some of the games we think are the year’s best.

Nintendo is not kidding around with the moniker “Ultimate.” The latest entry in the Super Smash Bros. series is truly ultimate. Every single fighter in the series’ history is here, from Jigglypuff to Cloud. There’s also a slew of new fighters including Inklings from Splatoon, and the massive space pirate Ridley. Play alone, or Smash with friends. Everyone. Is. Here.

If classic button-mashing fighters are more your speed, you can do worse than Soul Calibur VI. For the first time in its history, Soul Calibur runs on the Unreal Engine, which offers truly cinematic visuals. Every punch, kick, and whip practically flies off the screen. Strategize with multiple fighting styles, play dynamic bouts, and even create your own character.

This year’s best Spider-Man movie was actually a video game. Sorry, Tom Holland. Whether you’re slinging through the city, scaling sky-scrapers, or just beating up bad guys, this entry in the much-maligned Spider-Man video game series is as refreshing as his 90s cartoon.

There are few settings as dynamic and ripe for video game adaptation like the old west. If Grand Theft Auto took place on the range, it would look very similar to one this year’s most celebrated titles. With a vast, atmospheric world, become a hero, a villain, or perhaps something a little more complicated. Adventure alone, or online with your posse.

The all-new “Dragon Engine” makes this Yakuza’s most stunning entry, by far. In fact, just about everything in this game is re-vamped, from the mini-games to the grimy city itself. In fact, if you want to escape the drudgery of operating in the underbelly of the city, you can escape for a while and relax in the vacation destination of Onomichi. Everything is streamlined to provide an engrossing experience.