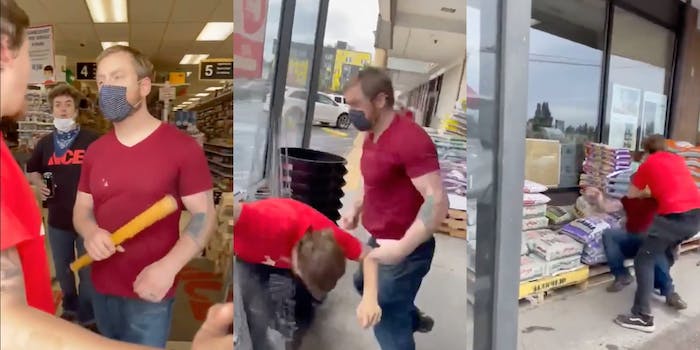 After the dispute, a Michigan Ace Hardware store was review bombed after people mistook it for the one in the video.

Video footage shows a fist fight break out between a customer named Bobby Dixon and an unidentified employee at Ace Hardware in Lake City, a neighborhood in Seattle, Washington.

A user named Irving, known as u/friend1y, posted the video on Reddit in the r/ActualPublicFreakouts subreddit.

According to KOMO, Dixon, who was apparently masked, attempted to enter the store with a maskless friend but the two were told that they couldn’t enter without a mask. Then, Dixon was allegedly approached by an employee with a baseball bat when he tried to re-enter alone. The alleged employee, who was wearing a mask, pushed Dixon back with the bat, saying, “Get out.”

Then a full-on fist fight broke out, as the employee began swinging punches at Dixon and the two shouted unintelligibly at each other.

The person recording the video says, “These are the employees at Ace Hardware in fucking Seattle.”

The fight breaks up as the person recording steps behind the open door of his truck.

“I’ve got the whole fucking thing on video, bitch,” the man yells as the employee walks back into the store.

According to the King County website, vaccinated people “should” wear a cloth face covering over their nose and mouth in indoor public settings. Unvaccinated people still “need” to wear masks in all public spaces. Dixon claims his maskless friend is fully vaccinated.

“He’s clearly not bothered by the unmasked person,” one user said. “Otherwise he would’ve maintained his distance.”

Others said it was the store’s right to deny service.

“You don’t have to wear a mask ever, but privately owned businesses don’t have to let you in. Thanks to the glory of freedom they don’t even have to give you a reason,” another user said.

Some users just wanted to know who the camera man thought he was.

“Love the way the camera operator is calling someone a ‘bitch’ while he runs and hides behind his planet-sized truck,” someone said.

Another said, “Cameraman sounds like a tough guy, talking smack while walking backwards to his car.”

Dixon told Fox News the store declined to release the aggressor’s name but that he had filed a police report and intended to press charges.

After the video footage was posted, the wrong Ace Hardware store was review bombed. The Lake City Ace Hardware in Michigan, not Washington, received multiple reviews, dropping its overall ratings on Google to two stars.

“Very nice staff. After you receive ten beatings the 11th is FREE!” one review read.

Another user said, “Went to buy a bat. Seems they sold the last one to the employee trying to beat someone with it. Oh well.”

The actual store in Seattle has 132 reviews on Google with a four-star overall rating.

Neither Irving nor Ace Hardware responded to the Daily Dot’s request for comment by the time of publication.