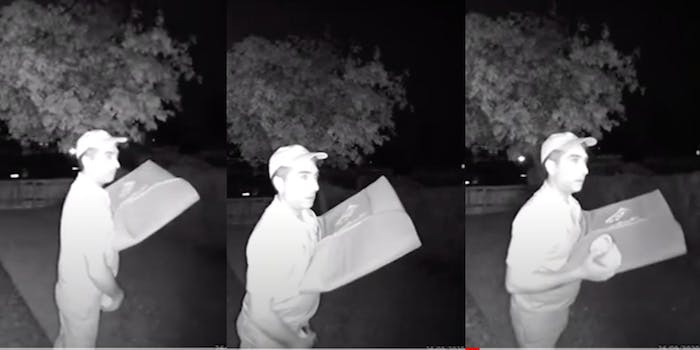 The pizza delivery company is investigating.

Domino’s Pizza is investigating one of its delivery drivers in England after footage showed the employee rubbing a pint of ice cream on his crotch before handing it to the customer, the New York Post reports.

The video, which was taken by a Ring doorbell app on Sept. 27, shows the Domino’s employee walking up to customer Jonathan Terry’s door with a pizza and a pint of ice cream in his hand. He looks around before rubbing the pint on his crotch over the outside of his pants.

When Terry opens the door, the delivery driver says, “Hello,” and hands him the pizza and pint.

Terry, 31, said he was about to take the Ben & Jerry’s birthday cake pint out of the freezer when he received a call from his girlfriend, per the New York Post. She told him to look at the footage and said,”‘I hope you haven’t eaten the ice cream that Domino’s have sent you.'”

Domino’s offered Terry vouchers for the incident, but he refused to accept them, the Sun reports.

Domino’s, which did not immediately respond to the Daily Dot’s request for comment, told the New York Post that it is investigating the incident. “We are conducting a formal investigation with this team member as a top priority,” Domino’s said. “We have apologized sincerely and are working to resolve this issue with the customers so we can put this right.”

Terry said he intends to never order from Domino’s again, per the Sun. “It felt quite disrespectful and very vile,” Terry said. “My housemate said he felt violated—he was not happy.”

On Twitter, however, some of the responses were flip. One person jokingly tweeted that it’s “cool that dominos is expanding beyond crotch-rubbed pizzas.”