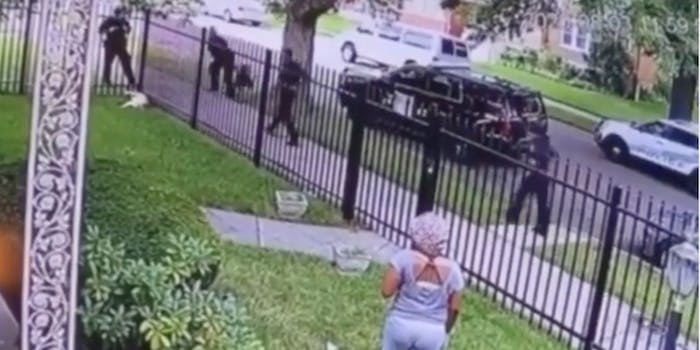 Video shows cop shooting dog in its own fenced-in yard

He seemingly lost control of his own K-9.

Video of police shooting a dog inside its own fenced-in yard in Michigan is stirring outrage online.

Captured by a surveillance camera on a home in Detroit, the footage shows an officer fatally shooting the dog after losing control of his own K-9.

A description of the incident from advocacy group Animal Hope and Wellness states that the two canines began fighting moments before the shot rang out.

“In the video the dog is barking through the fence at the policemen and police dogs,” the group states. “The officer draws his gun, as the dog appeared to be latched on to his dogs muzzle or face through the fence. Instead of trying to separate them he shoots the dog in the head.”

The footage has currently been seen more than 125,000 times on Instagram alone, with multiple versions of the clip appearing across social media.

Animal Hope and Wellness also called on its supporters to contact the Detroit mayor’s office to demand disciplinary action for the officer involved.

The video even caught the attention of Julián Castro, the former United States Secretary of Housing and Urban Development and ex-Democratic presidential candidate.

“A Detroit police officer shot someone’s dog that posed no threat inside its own fence after he lost control of his own K9,” Castro tweeted. “This officer should be held accountable. He should be fired and prosecuted.”

The identity of the officer has thus far not been determined. The incident, according to news.com.au, is currently under investigation by the Detroit Police Department.