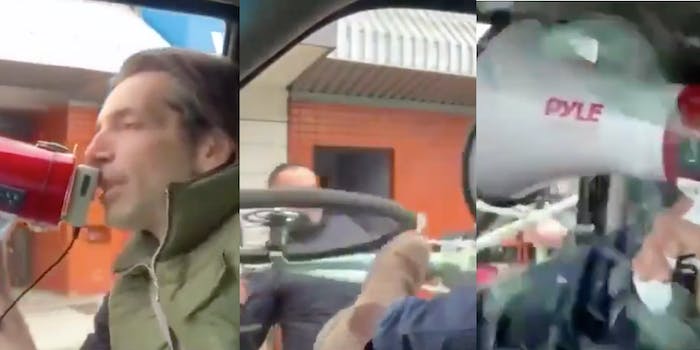 An angry bystander smashed in the window of a COVID-denying conspiracy theorist making his way through downtown Vancouver, Canada, with a megaphone on Saturday.

The anti-mask protester, identified by CTV News as Alex Lasarev, was shouting conspiracy theories out of a moving car window when the altercation occurred.

Using a megaphone to really drive the message home, Lasarev calls the coronavirus—which has killed more than 2,830,059 people worldwide, according to data from Johns Hopkins University—a “psychological operation” aimed at convincing the masses “of a reality that’s based on fear.”

As Lasarev projects his opinions onto the city’s Main Street from the car’s passenger seat, a middle-aged man with a bicycle approaches the car window. He takes a few swings at the megaphone, trying to knock it from Lasarev’s hands. He tells the Lasarev to “shut the fuck up” before raising his entire bicycle into the air for use as a bludgeon.

He smashes the bike into the side of the vehicle several times as Lasarev tells the driver to keep moving. The unidentified man nearly wrenches the megaphone from Lasarev’s hands as the vehicle inches away, again telling him to “fuck off.”

He can’t keep his message quiet for long, however, and almost immediately reopens the window to “wake people up” to the reality of COVID-19. Mid-way through his next talking point, the man with the bike approaches the window again. This time, when he takes two mighty swings at the COVID-denier’s window, it smashes into pieces.

Somehow, Lasarev is undettered. After asking the man if he is “happy now”—which earns an eager “yeah” from the bike-wielding man—Lasarev launches back into his rant.

“You’ve been psychologically manipulated my friend,” Lasarev says. “We still love you, but you need to wake the fuck up.”

Lasarev’s statements are easily proven false. Deaths consistently rise from year to year but rarely see as drastic a jump as between 2019 and 2020. In Canada, where the video was filmed, deaths were consistently higher on a week-to-week basis in 2020 than in previous years.

In the U.S., deaths rose sharply in response to the COVID-19 pandemic. As of mid-December, officials estimated there were 400,000 more deaths in 2020 than in 2019, according to USA Today.

Vancouver police are recommending charges against the man with the bicycle. Police told CTV News they are recommending “charges of mischief and assault with a weapon against a 52-year-old man.”