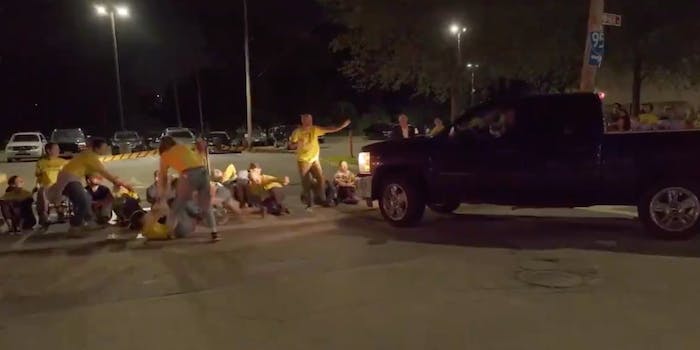 Another officer then pepper-sprayed protesters.

A man who is allegedly a correctional officer drove into a group of Jewish protesters outside a Rhode Island detention center on Wednesday night, viral videos show.

The protesters belonged to the Never Again Action movement, a Jewish group of organizers that aims to shut down Immigration and Customs Enforcement (ICE). The video shared by Never Again Action shows protesters peacefully lined up on the streets, with some shouting slogans such as “When I say Justice, you say now!” followed by chorus chants of “Now!” and cheers.

BREAKING: Here is HD video of an ICE guard driving his truck into us as we sat peacefully blocking the Wyatt Detention Center.

We’re putting our bodies on the line because we see the camps and the roundups. We’ve learned from our ancestors: NEVER AGAIN FOR ANYONE. pic.twitter.com/KnOu5xoOEb

The video shows protesters who were huddled around the pickup truck suddenly screaming and panicking. A person on the other side of the truck is seen raising a can in the air and pepper-spraying the crowd.

After the first ICE guard ran us over with his truck, the rest of them ran over & pepper-sprayed us. The police present just stood by and watched, doing nothing.

A few seconds later, the video shows a woman being carried by a man away from the crowd as she says, “I’ve got pepper-sprayed, please help me.” A law enforcer also appears to have gotten sprayed, and a protester is seen screaming after him, “You allowed that! You deserve 10 times worse.”

Never Again Action originally said the person who drove the truck through the crowd is an ICE agent, but a protester told Newsweek that the driver is a correctional officer who works for the privately-owned detention facility.

“We have confirmed that the person driving the truck is a correctional officer who works for the detention facility,” said the protester, Amy Anthony. “The driver was in his uniform when he hit the protestors. His rank and name were embroidered on his shirt and he was wearing a badge at the time.”

Anthony also said no one intervened to help the injured or apprehend the officer.

“Many protesters were trying to give the police statements and they refused to take our statements,” she told Newsweek.

Another follow-up video shows a protester asking officials, “Why is he standing, why isn’t he in handcuffs? That guy just tried to kill a bunch of people with his car, why is he not in handcuffs?”

Several people ended up going to the hospital. Meanwhile the guards, including the driver of the vehicle, returned to the private prison where they are holding #ICE detainees. The police did nothing other than take witness statements. #NeverAgainIsNow pic.twitter.com/YTEQzcXooZ

Eilertsen also shared a photo of the alleged truck driver.

This is the prison guard who drove his truck into a group of peaceful protestors pic.twitter.com/lwjhaMKECL

“As Jews, our families taught us the lessons of the Holocaust, and we promised that we would speak out and act if we ever saw the warning signs of a group of people being targeted, dehumanized, and rounded up,” Never Again Action said in a statement to the Hill. “We are answering the call of our ancestors to sound the alarm: #NeverAgainIsNow.”

The Wyatt Detention Center is run by Central Falls Detention Facility Corporation, according to the Hill. An official at the center gave no immediate comment to the Daily Dot.