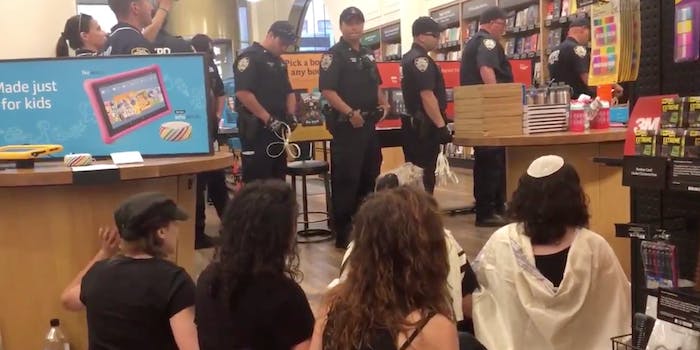 The NYPD arrested at least 37 people

Hundreds of Jews took over Amazon’s Manhattan store on Sunday to mark a mournful day on the Jewish calendar by protesting against the tech giant’s complicity in Immigration and Customs Enforcement’s (ICE) activities.

Demonstrators filled up the store as well as the road outside, protesting Amazon’s ties to data firm Palantir, which works directly with ICE, according to 927mag.

Photos and videos on social media show protesters gathered inside the store, many reciting a Jewish prayer:

We are praying with our feet, sitting in at @amazon in midtown reading Eicha and words from detained immigrant families and calling on Amazon to stop enabling ICE's cruelty w/ @JFREJNYC @MaketheRoadNY @bradlander & hundreds more #JewsAgainstICE pic.twitter.com/LSHFSzNfcd

Protesters were marking the Jewish occasion of Tisha B’Av, between Saturday evening and Sunday, a ritual that marks the “saddest day on the Jewish calendar.”

“We mourn the destruction of all things holy on the Jewish observance of Tisha B’Av,” CBST’s Senior Rabbi Sharon Kleinbaum said in the statement to the Daily Dot. “This current administration’s attacks on immigrants, Muslims, Latinx people, Jews, people of color, and others are likewise horrific destruction of holiness. CBST is proud to stand with all those suffering today and against the evil of the camps, ICE policies and the separation of families. Never again is now.”

One of the rituals for observing Tisha B’Av includes fasting, which means some protesters may have been fasting, as pointed out by supporters on Twitter.

Different Jewish organizations came together for the protest, including Jews for Racial and Economic Justice and the Congregation Beit Simchat Torah (CBST), New York’s LGBT synagogue.

“Amazon plays a key role in this crisis by providing the technological backbone for ICE’s operations to track, identify, and hunt down immigrants—and by marketing new technologies to further help ICE fulfill [President Donald] Trump’s white nationalist agenda,”  CBST said in a statement to the Daily Dot. “The peaceful march is one of dozens of #CloseTheCamps protests and vigils planned by American Jewish groups, including the National Council of Jewish Women, HIAS, T’ruah, and more, for whom Tisha B’Av has become a call to action.”

Many organizations and protesters shared their photos on social media with #JewsAgainstICE or #NeverAgainIsNow:

(At least) one of the people arrested with us wasn't Jewish. He said that as a kid he met a Holocaust survivor who told his class that "good people did nothing."

But it didn’t stop the demonstrators from continuing to protest. A video by Twitter user Joshua Leifar on Sunday afternoon showed NYPD continuing the arrests while protesters, filling up the street outside the Amazon store, chanted “Close it down.”

Arrests continue at the #JewsAgainstICE protest outside Amazon in NYC pic.twitter.com/dFaTTq1tAe

According to Jewish organizations, 40 people were arrested, though 927mag put the number arrested at 37. Reports from the ground say NYPD had to use an MTA bus to transport the protesters:

NYPD took an MTA bus out of service to transport the over 40 #JewsAgainstICE who have been arrested demanding @amazon cut ties with ICE. #NeverAgainIsNow #CloseTheCamps #NoTech4ICE pic.twitter.com/O6BmrCRDUR

“So there are so many Jews who got arrested at the Amazon flagship store protesting their connection with ICE that the NYPD have…commandeered a bus to take the arrests,” Rafael Shimunov, a Jewish organizer and member on the board of Jews for Racial and Economic Justice, said in a tweet. “I’ve never seen that before, ever.”

According to author Molly Crabapple, many of those arrested have been given a court date that falls on the Jewish holiday of Rosh Hashanah, to be marked from September 29 till October 1.

The Daily Dot has not independently verified this claim.