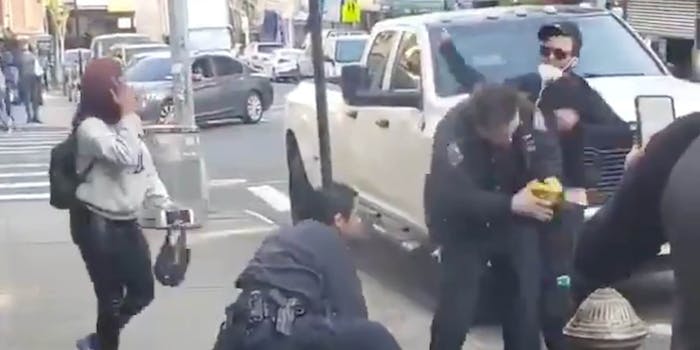 The videos show that an officer punched a woman in the face after another officer was punched in the back of the head.

Videos show that an officer punched a woman in the face after another officer was punched in the back of the head during a Bronx brawl.

The videos, which were recorded by a bystander, were shared on social media and by the New York Post.

The NYPD Sergeant’s Benevolent Association shared one of the videos on Twitter Tuesday. The video shows two NYPD officers arresting a man, who was identified as Yoemdy Castro by the Post. Castro was reportedly being arrested on the suspicion of robbery when a man in a medical masked, who has since been identified by as 31-year-old Nelson Jimenez, comes up behind one of the officers and punches him in the back of his head twice.

The officer points what appears to be a taser at Jimenez, and he runs away.

“NYC people are dying, and suffering as COVID-19 plagues thousands but the same scumbags continue to roam the streets of NYC and attack NYPD cops. Sadly the wrong people are suffering. Welcome to DeBlasios NYC,” SBA tweeted.

In the first video, a woman, identified as Brandee Isom, can be seen on the ground trying to speak with one of the arresting officers.

What the first video doesn’t show, however, is that the other officer then punches Isom in the face.

In the second video, shared separately by SBA, three officers are pushing Isom away before one punches her in the face.

According to the Post, this is the latter part of the incident. The Daily Dot wasn’t able to independently verify the chronological order of the events in the videos.

She is then put on the ground as officers seemingly cuff her.

According to the Post, Isom’s mother said, on condition of anonymity, that the officers should have just arrested her rather than punch her.

She alleged the officers were upset one was punched by Jimenez and took their “revenge” out on Isom.

She further claimed that the officer who punched Isom personally told her that Isom hit him first.

The NYPD Police Commissioner Dermot Shea on Wednesday called the first video a “premeditated assault” on a uniform officer and “disturbing on so many levels.”