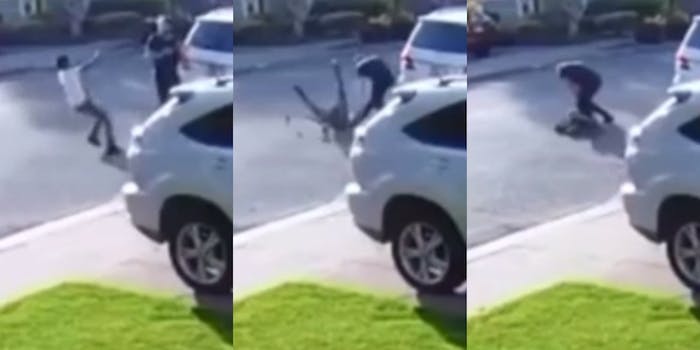 ‘Are you serious?’: Teen robber pummeled by would-be victim in viral video

It didn't go according to plan.

A video of a botched robbery attempt in San Leandro, California, shows a pair of teenaged wannabe criminals approaching a grown man. They think they’ve come up on a payday, but they find out they’ve picked the wrong one.

The endeavoring thieves are shown on home security camera footage threatening a man who appears to be getting into his car. One of the robbers is armed with what looks like a pistol and points it at the man.

The video, posted to Reddit by u/O_Farrell_Ghoul, shows the robbers trying to intimidate the man, who backs up at the sight of the weapon.

The man says, “Are you serious?”

He grabs the smaller of the two teens, lifts him, and dumps him into the middle of the street. As he’s elevated, the teen yells, “OK, OK.”

The teen loses grip of his gun, which may not have been real or loaded. The man kneels on the teen who yells under the man’s weight.

The man lets up from the teen and tells both robbers, “Get the fuck out of here.”

The Reddit video’s popularity may partially stem from racist users laughing at the teenagers and making racist comments. The video gained further popularity when comedian Loni Love tweeted it on Saturday.