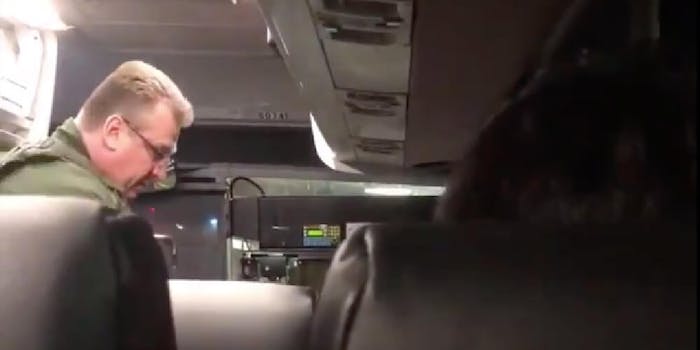 A video recorded by a journalist on a Greyhound bus shows a U.S. Customs and Border Protection agent arresting an alleged undocumented immigrant in Toledo, Ohio.

Joe Gomez shared a video of the incident on Twitter on Tuesday evening.

“The man said he had been here 7 years,” Gomez tweeted. “Earlier he helped translate for several women at a bus stop who didn’t speak English.”

In the video, the agent is seen speaking with someone who, at first, isn’t invisible.

“You can’t make any more calls… You’re under arrest,” the agent says behind a sea of bus seats.

He adds, “You’re not allowed to… speak.”

It appears the agent helps the man gather his belongings. The agent carries a small plastic white bag off bus, and a few seconds later, a man in a red jacket is seen getting up from his seat and following him.

“Several other immigrants on the bus said they were terrified after watching what happened,” Gomez wrote in a follow-up tweet. “And one young woman studying abroad from Germany seemed to be crying.”

In a statement to the Daily Dot, Greyhound condemned the bus search.

“Greyhound does not coordinate with CBP in regard to these checks, nor do we support these actions,” the statement said. “As a regulated carrier, Greyhound is required to comply with the requests of federal agents; however, we understand the importance of our customers being informed about potential checks. Because of this, we provide bilingual Know Your Rights information in our terminals and online as well …  We are calling on Congress to change the law and will support positive efforts to do so.”

On Twitter, many asked what Border Patrol agents were doing in Toledo.

It was very, very shocking and strange and I have to say it shook everyone on that bus. Legal or not, nobody was expecting that.#GoGreyhound

And many compared the incident to arrests in Nazi-controlled Germany.

Border Patrol did not respond to the Daily Dot’s request for comment. The agency has previously detained immigrant passengers, mainly people of color, on buses alongside the border and defended such measures as “a means of preventing smuggling organizations from exploiting existing transportation systems to travel to the interior of the United States,” according to a 2018 CNN report.