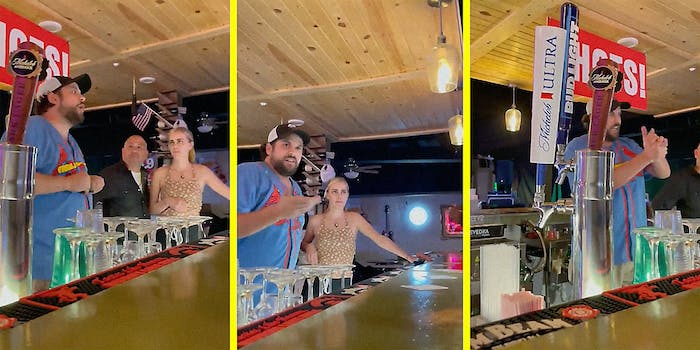 'This wasn't about ID. This was about having power over someone.'

A viral video shows a Missouri bartender refusing to serve a military veteran and crushing the woman’s ID with his hand. He later claimed he believed she was underage.

Following the altercation, reviewers flooded Google and Yelp with 1-star votes and negative comments about the bar, Loto Lounge in Osage Beach.

The 7-minute video was posted to Facebook by Noel Cook, an active Air Force member. It shows an altercation between himself and his military friends and the allegedly drunk bartender, Josh Weitkamp, on May 2. Cook’s caption broke down the dispute.

“[Weitkamp] started to destroy someone’s military ID because he ‘used to be a cop and knows what an ID is supposed to look like’ and bends her card and throws it in the trash, refusing to let us retrieve it and just leave,” Cook wrote.

“I appreciate her efforts since she realizes that he is getting out of hand,” Cook wrote.

In the video, Weitkamp says that the laminate on the woman’s military ID card indicates a forgery. He also tells the woman that the military has done “jack shit since World War II” and that she looks like a minor.

“I’ve never been more heated about a non-racial interaction with someone and the straight disrespect he had for fellow service members,” Cook wrote. “I hope you see this, Josh Weitkamp, and know that your actions that night will define you as a person.”

Lake News Online reported that police arrived on the scene and determined that the woman’s ID was legitimate. No arrests were made.

Popular user @davenewworld_2 shared the video reporting on Twitter where it was met with outrage over Weitkamp’s actions.

User @BRaime619 tweeted: “This wasn’t about ID. This was about having power over someone. Notice how the bar is empty? This guy desperately needs customers. He just doesn’t want THOSE customers! God I hate it here!”

Loto Lounge responded in a statement on Facebook that said Weitkamp was not employed at the bar but is “a local musician who has personal ties to the venue,” according to Lake News Online.

“He is extremely remorseful for his actions and we are working to make amends with the military members involved,” the statement said, in part. “We will do our best to reach out privately to those individuals and to publicly convey our appreciation to all military members in the future.”

Meanwhile, Loto Lounge’s reviews were tanked on Google and Yelp. By Monday afternoon, the bar had more than 500 Yelp reviews and an average rating of 1 star.