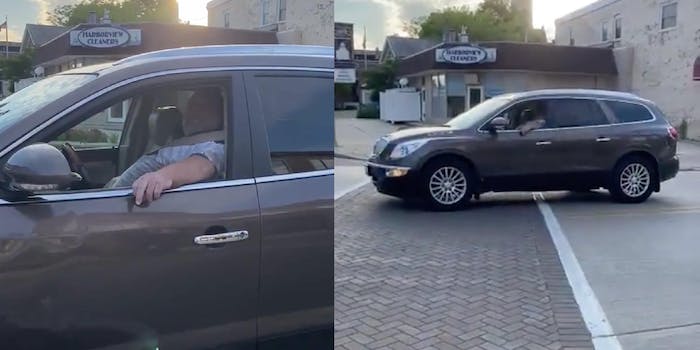 A man was caught on video harassing a group of young female protesters from his vehicle in Port Washington, Wisconsin.

In the video, the man stops in the middle of a crosswalk to harass a group of four girls demonstrating for the Black Lives Matter movement. One of the girls, according to a Twitter user who was part of the group and uploaded the video, is only 17 years old. The Twitter user, @nataliekelm, said they were “peacefully holding signs for the BLM Movement.”

In the video, the man, who has yet to be identified, tells them, “I hope you get raped by a Black guy.”

“Why did he have to emphasize ‘Black man’?? I’m sure u can guess….” @nataliekelm tweeted.

They tell him that he cannot say that to them and that one of the protesters is a minor.

“Have fun losing your job after this,” the recorder says. “That is not appropriate. Please do not say that to me.”

The man then goes off on a tangent about defunding the police. It is unclear if any of the protesters were holding a “defund the police” sign.

“If we say defund the police, you cannot say you hope we get raped. What is wrong with you? I have it on video. … You’re sick,” the recorder says to the man.

The man, who was seemingly upset about the protesters practicing their First Amendment rights, tells them that he “can say whatever I want” because “that’s my freedom of speech.”

“Police are working with us to see what this man said goes against the first amendment! & have already contacted him about this! Still wondering, though, would they have contacted him if I didn’t post on Fb or here?? something to think about…” @nataliekelm tweeted in an “update.”

The man’s family, according to @nataliekelm, is seemingly receiving threats.

“I talked to a family member of his on the phone tonight. PLEASE don’t contact his family or damage his property. why fight his hatred with violence and threats?? Instead PEACEFULLY try to end hatred in the community. THX,” @nataliekelm later tweeted.