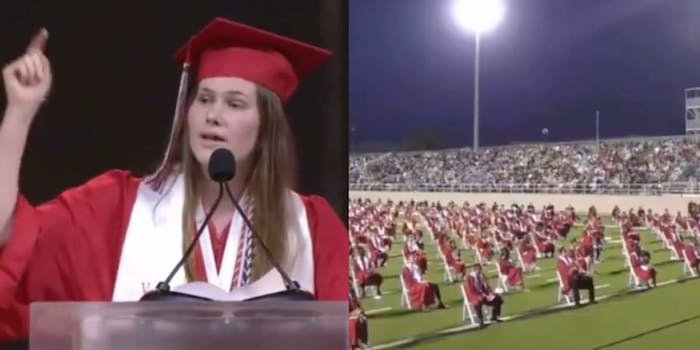 A high school valedictorian tweaked her pre-approved speech to make a statement on reproductive rights.

A viral TikTok video features Paxton Smith of Lake Highlands High School in Dallas giving the speech, in which she says she cannot stand by as there is an ongoing “war on my body and a war on my right.” The video is earning praise from people online.

User @thehippiechick uploaded the video to TikTok and indicated in the comments that she watched it in person.

Smith’s speech was posted across social media on Tuesday. She gave the speech in front of her classmates seated across a stadium as they cheered her on.

“I have dreams and hopes and ambitions. Every girl graduating today does,” she says. “We have spent our entire lives working towards our future, and without our input and without our consent, our control over that future has been stripped away from us.”

Smith’s speech comes mere weeks after Texas Gov. Greg Abbott signed into law the “heartbeat bill.” It is a bill that is reportedly very difficult to challenge and can ban an abortion as early as six weeks into a pregnancy—when many women don’t even know they’re pregnant. The bill will also allow private citizens to sue abortion providers. Pro-choice advocates say the law is one of the strictest in the country, the Texas Tribune reported.

“I’m terrified that if my contraceptives fail, I’m terrified that if I’m raped, then my hopes and aspirations and dreams and efforts for my future will no longer matter,” she said. “I hope you can feel how dehumanizing it is to have the autonomy over your own body taken away from you.”

She says that she wanted to use her platform to make her voice heard—for her own sake and for the sake of the women in her and the audience’s lives.

Paxton reportedly ditched her pre-approved speech, in which she was going to talk about the effect of the media on the youth. Following the signing of the law, she changed her mind, according to Refinery29.

The law will reportedly become effective in September.

The videos featuring Smith’s speech have racked up millions of views on social media, with many commending Smith for her courage.

“Though your voice breaks and your knees shake, stand up and speak up!” commented one user on the TikTok video.

“Women fought hard to get where we are today!” wrote another.

Some used the opportunity to point out just how restrictive the measures are.

“Someone said female embryos have more rights before they are born than after & it’s true,” commented one person.

“Conservatives always preach about not being controlled until they want to do the controlling,” wrote another.