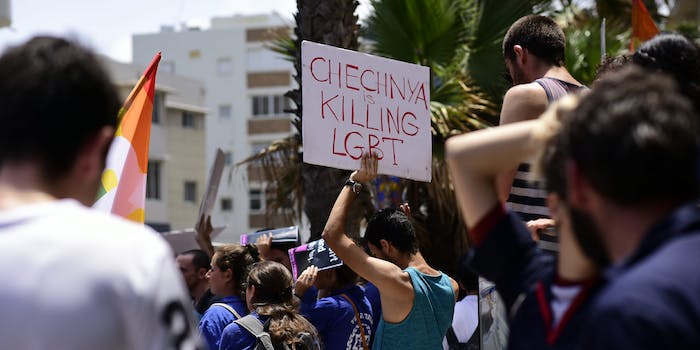 Many gays in the Russian republic are still scared for their lives.

Gays are fleeing Chechnya after the government began a brutal crackdown on the region’s gay male population. But Russian LGBTQ activists are concerned the United States may not be willing to give visas to those trying to escape persecution in the country.

According to a report from BuzzFeed News, the Russia LGBT Network has not facilitated visa applications to the United States because the organization was discouraged by discussions with the U.S. embassy in Russia.

“We were informed there was no political will,” an anonymous Russia LGBT Network spokesperson told BuzzFeed News. “They’re not going to provide visas. They’re going to support us in other ways, but not with visas.”

Only two gay Chechens have been able to flee Russia with visas (to Lithuania); many others are leaving the nation without one. Chechen citizens reportedly fear Chechnya’s president, Ramzan Kadyrov, as they believe he will track down and kill Chechens outside of the Russian Federation’s borders.

Chechens may be having difficulty coming to the country on account of U.S. visa laws, which do not allow foreign visitors to receive a visa due to human rights concerns. Instead, Chechens would have to apply for a tourist visa and prove that they plan to return home.

Likewise, fleeing Chechens cannot claim to be refugees because they have yet to leave their nation of origin—Chechnya is a semi-autonomous regime operating within Russia. And while fleeing Chechens would become refugees if they leave Russia and apply to enter the U.S., the Russia LGBT Network fears this could put many Chechen refugees in danger if they’re unable to find a safe place to go.

“We believe there are still options available in extreme cases like this and we are in contact with Russian LGBT activists and U.S. government officials to continue to explore those option,” the Council for Global Equality told BuzzFeed News. “We hope there is political will on the Hill and within the administration to provide a safe haven in the United States for carefully vetted claims. As advocates, it’s our job to try to make that case here in Washington.”

LGBTQ activists are currently in discussions with five countries, two of which are not part of the European Union. Nine men have reportedly been granted visas, with the two Chechens headed to Lithuania.

“It’s very important to act, because they are suffering,” Lithuanian Foreign Minister Linas Linkevicius said to the BBC. Linkevicius considers their acceptance an “implicit message” to the Russian government, that Lithuania is “taking care of Russian citizens… [whose] rights were abused.”