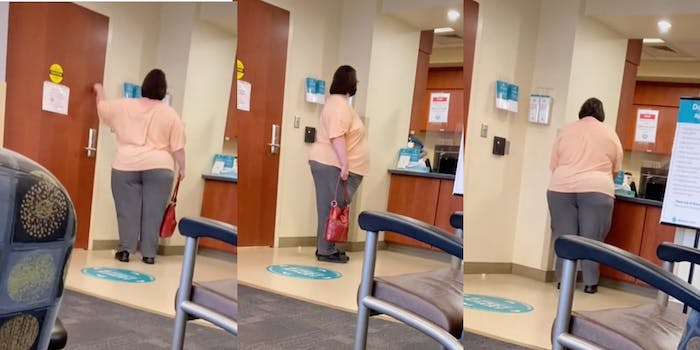 ‘You are aware of your wait time, so what’s the problem?’: Karen tries to skip the line at urgent care clinic in viral TikTok

'There’s all kinds of reservations in front of me, and I’m not doing that.'

Viral TikTok footage shows a woman dubbed a Karen attempting to skip the line at an urgent care clinic because she got impatient. The woman had been waiting in line for hours because she didn’t have an appointment.

The TikTok, posted by Jamie Cuthbertson or @​​jamesmichelle5 on the platform, reached 2.3 million views and over 6,000 comments as of Saturday.

The Karen can be seen in the video knocking loudly on the door that separates the doctor’s offices from the waiting room. A receptionist came out from around the corner and asked her from behind the receptionist’s desk, “Hey, what’s going on?”

Sounding upset, the Karen informed her, “They won’t take me next. There’s all kinds of reservations in front of me, and I’m not doing that.”

The receptionist told the Karen that’s how the clinic operates, but Karen snapped back, “Tough.”

After failing to convince the nurse that she deserved to go next, the Karen went back to knocking on the door until the receptionist threatened to call security.

“Why can’t y’all do that,” the Karen asked, meaning why can’t she skip the line. “That’s a crazy ass rule.”

The receptionist told her that if she didn’t want to wait, she could go to the emergency room, but the Karen said she didn’t have a ride. She also declined to use the phone, saying she already used it.

“Well, I’m sorry, but that’s the way our clinic works,” the receptionist said. “We can’t break the rules for one person.”

“Yes you can,” the Karen insisted.

The receptionist explained that there were other patients already being seen and patients with reservations. If she was going to break the rules for this one Karen, she’d have to break them for everyone.

Still angry, the Karen said she came to the clinic before 4 pm, and it was almost 6 pm at the time of the interaction. She said she was a walk-in patient but argued that it didn’t make sense for her to wait until after 7 pm to be seen.

The receptionist asked if she was informed of the wait time when she got there, and after talking in circles and backtracking, the Karen admitted that she was told the wait would be three to four hours.

“So you are aware of your wait time, so what’s the problem?” the receptionist asked.

Then, in a classic Karen move, the Karen asked for the nurse’s supervisor. When the receptionist didn’t have a business card to hand out, the Karen decided to keep waiting.

“Fucking assholes,” she said as she walked away.

Viewers couldn’t believe the Karen’s audacity but praised the receptionist for how she handled the situation.

‘The receptionist needs a raise NOW,” one viewer commented.

Another wrote, “The receptionist did an amazing job keeping staying polite and keeping her cool.”

The Karen, though, couldn’t have acted more entitled, viewers said.

“The entitlement is mind blowing,” one person commented. A different user asked, “Did she really think someone would answer that door??”

Another viewer said, “It’s scary when you think maybe people have always been like this, we just didn’t have phones with cameras to expose it.”

A different viewer assured them it’s always like this, commenting, “This is triggering I’m a front desk receptionist at an urgent care. It’s really like this but worse I PROMISE.”

“90% of patients are like this now, and that’s no joke,” someone else agreed.

Another person said that it’s this kind of behavior that pushes people to quit their jobs. They commented, “This [is] why us healthcare workers are leaving our jobs and going to work at a minimum wage job. WE ARE OVER THE KARENS OF THE WORLD.”