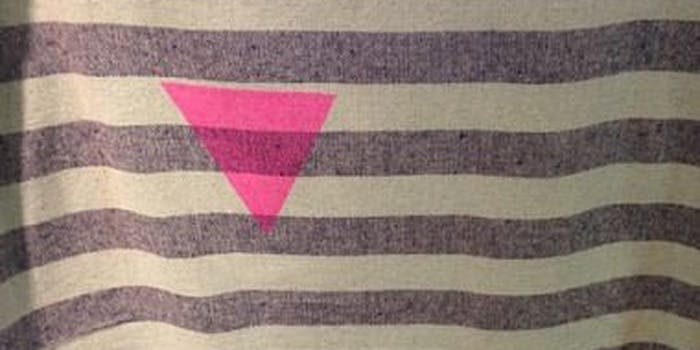 Naturally, the Anti-Defamation League is furious about it.

With all the colors and all the shapes in the world, Urban Outfitters has decided to sell an item reminiscent of the uniforms worn by gay male concentration camp prisoners in Nazi Germany.

The Anti-Defamation League issued a statement on Monday addressing a controversial tapestry being sold at Urban Outfitters retail locations.

The Anti-Defamation League (ADL) today urged the Urban Outfitters retail chain to remove a tapestry currently being sold in stores that is “eerily reminiscent” of the prisoner gray and white stripes and pink triangles that gay male prisoners were forced to wear in Nazi concentration camps.

“Whether intentional or not, this gray and white stripped pattern and pink triangle combination is deeply offensive and should not be mainstreamed into popular culture,” said Abraham H. Foxman, ADL National Director and a Holocaust survivor. “We urge Urban Outfitters to immediately remove the product eerily reminiscent of clothing forced upon the victims of the Holocaust from their stores and online.”

The tapestry does not appear to be sold online, but the ADL told the Daily Dot that the photo distributed in the online statement was taken at an Urban Outfitters location in Boulder, Colorado. 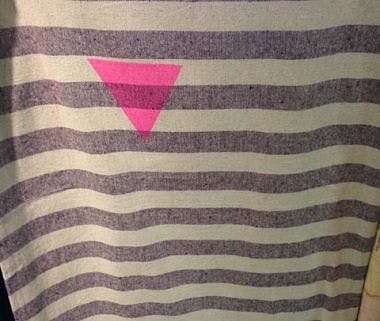 We reached out to the store in Boulder and a sales associate confirmed that she recalled seeing it sold in the store in the last few months, but that it was no longer available.

When comparing the tapestry in question side-by-side with the uniforms worn by homosexual concentration camp prisoners, it’s hard to deny the similarities.

If this was the first time Urban sold an offensive item, we might be able to let this one slide. But they’ve racked up a Dead Sea Scroll’s worth of controversial items, including one garment that was horribly offensive to Jews. 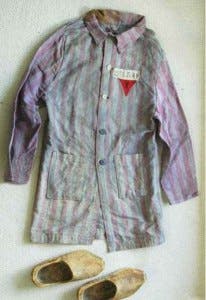 Back in 2012, Urban came under fire from the ADL and decent human beings everywhere for selling a yellow t-shirt with a blue star of David on it.

“We find this use of symbolism to be extremely distasteful and offensive, and we are outraged that your company would make this product available to your customers,” Barry Morrison, regional director of the ADL, wrote in a letter e-mailed to Richard A. Hayne, chairman and chief executive of Urban, in 2012.

The company also got heat in 2014 for selling a fake-blood-spattered sweatshirt with a Kent State University logo, reminiscent of the tragedy that occurred there when four students were killed by the National Guard during a 1970 protest. On top of all this, the company also has a controversial habit of co-opting the work of online artists.