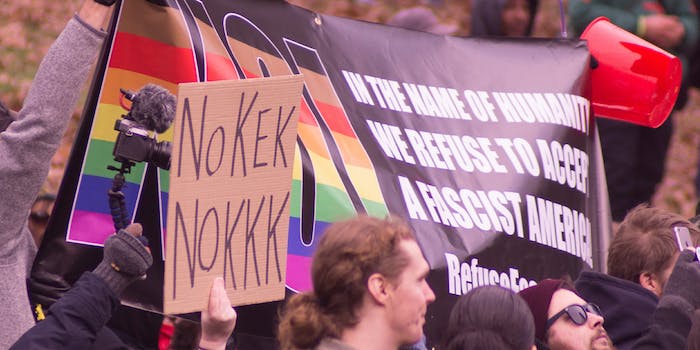 We can't let this happen again.

It has been almost a year since the Unite the Right rally in Charlottesville, Virginia, marred this nation. Though the gathering of white supremacists and neo-Nazis—yelling hateful chants, wearing swastikas, and carrying weapons—were met with vigorous counterprotests, the rally ended in violence, leaving a number of people injured, activist Heather Heyer dead, and a country horrified and in mourning.

And now the Nazis are coming back.

The same coalition of “alt-right” groups, led by white nationalist Jason Kessler, plans on returning this Sunday—this time to Washington, D.C.—on Unite the Right’s one-year anniversary to spread a message of hate.

There are a number of courageous people who want to stop them and prevent the devastation of last year. In the weeks and months leading up to Unite the Right 2, various activists and groups have stepped forward in hopes of doing what they can to derail or shut down the event altogether. With their words and actions, people are making it clear that there is no place for fascists in the streets and or Nazis in the public square.

Here are some of the groups standing against fascism in D.C. this weekend.

Shut It Down D.C. counterprotest

Various leftist groups are planning counterprotests to Unite the Right 2. A coalition of anti-fascist groups under the name “Shut It Down D.C.” have planned to confront “alt-right” groups throughout the weekend, culminating with a “Still Here, Still Strong” rally on Sunday morning in Freedom Plaza.

Some of the groups involved in the coalition include Black Lives Matter, D.C. Antifascist Collective, Smash Racism DC, Showing Up For Racial Justice (SURJ), and the Democratic Socialist Association (DSA).

Organizers estimate that at least 1,000 people will attend supporting counterprotests as part of the coalition, with many more attending in support of anti-fascist efforts. The group will be running counterprogramming, including teach-ins, a rally organized by Virginia students, and meals provided by Food Not Bombs DC, throughout the weekend.

Shut it Down D.C. emphasizes a diversity of tactics in preparation for the event. One anonymous organizer told Forward, “The rallies will be very open and we’ll aim to be family-friendly; with that being said, there will be neo-Nazis marching through town celebrating another date where they killed someone, so there is a strong need to keep watch and be available for security to keep people safe.”

Legal observers will also be on hand at the protest. The National Lawyers Guild (NLG) sends legal observers to many protests across the country. They were present in Portland last weekend as Antifa-affiliated groups confronted the Proud Boys and were met with police brutality. They also assisted protesters of Trump’s inauguration when they faced charges, and they were present at last year’s Unite the Right rally.

Late last week, sources informed members of ATU Local 689 that city officials and law enforcement were considering setting aside Metro cars specifically for attendees of Unite the Right 2. The union, which is the largest labor organization representing D.C. Metro workers, quickly put out a statement saying they would not go along with the plan.

“More than 80 percent of Local 689’s membership is people of color, the very people that the Ku Klux Klan and other white nationalist groups have killed, harassed and violated,” union president Jackie Jeter wrote. “The union has declared that it will not play a role in their special accommodation.”

By Saturday, D.C. officials abandoned the plan, insisting it was one of a number of options being considered. Metro spokesman Dan Stessel told the Washington Post vaguely, “[Metro] is working collaboratively with law enforcement to ensure safe travel for our customers and employees.”

Originally, Kessler considered returning to Charlottesville, but the city council denied him a permit to return to the site of the first demonstration. Washington, D.C., is in a different position, however, as the National Park Service (which handles requests for demonstrations on and near the National Mall) is compelled to approve a so-called “First Amendment event.”

Charlottesville’s statement denying the permit was brief but to the point, asserting that “the city does not have the ability to determine or sort individuals according to what ‘side’ they are on, and no reasonable allocation of city funds or resources can guarantee that event participants will be free of any ‘threat of violence.’”

Though the city of Charlottesville and its police department’s response to the first Unite the Right Rally was sharply criticized in a 207-page independent report released last year, the denial of this year’s permit was an important action for the city to take.

It is certain that more groups will emerge in opposition to Unite the Right 2 as the weekend draws near and more people become aware of its existence. Shut It Down D.C. will be updating their event schedule on its Twitter account.